Leila Malcal (レイラ・マルカル, Reira Marukaru) is the deuteragonist of Code Geass: Akito the Exiled. Leila is a military officer in the E.U. Army and comes from a family of former Britannian nobles. Under Gene Smilas, she serves as the Commander of the wZERO and is Akito Hyuga's superior officer. After Shin Hyuga Shaing and the Holy Order of Michael are defeated, Leila, Akito Hyuga, Ryo Sayama, Yukiya Naruse, Ayano Kosaka, Pierre Anou and Ashley Ashra along with his team, the Ashura Strike Force, had deserted their respective armies and join a group of Romani to avoid the war.

Leila is a very beautiful girl of average height. Her light blonde hair is very long, she has bangs which reach her eyes with two locks framing her face, from behind her hair reaches the small of her back and she also has two egg shaped buns that are usually held up with gold coloured braces. In the battle at Slonim, she wore her hair in twin pigtails while wearing a combat suit.

Leila is a kind person who wishes to end the war in the E.U. and to save the Japanese (Elevens) who fight the wars instead of the Europeans. She loves her friends and wishes to protect them, willing to sacrifice anything, even her own life, to do so.

Leila Malcal is the daughter of two Britannian nobles, Bradow von Breisgau and Claudia Breisgau. Before her birth, her parents had defected to the EU because they disagreed with the dated ruling system in the Holy Britannian Empire, after which they had Leila. Her father became a politician who gained massive support with his charisma and ability to rally the people, earning the nickname Assembly Man. When she was six, Leila attended a rally her father was speaking at with her mother and Gene Smilas. Someone left a sakuradite bomb in the crowd which detonated, killing Bradow and many in the crowd. Gene evacuated Claudia and Leila, but their car was attacked and left by the side of a road, burning. Her mother told Leila to run before the car exploded. Leila runs into the surrounding forest, but falls through a frozen pond. She is rescued by a green-haired woman, who offers her a contract she forgets. Thereafter, Leila was adopted by the Malcal Family with the deaths of her parents, mostly because Malcal Senior wanted Britannian noble blood joined with his family, and engaged her to his youngest son, Ioan. At some point, she attended school with Anna Clément. She eventually joined the army to get away from her home situation and rose to the rank of Major in the E.U. Army, originally serving as an adjutant to Commander Anou in the wZERO Unit. Leila planned the military operation known as Operation Alpha with the objective of rescuing the surrounded 132nd Regiment in Narva who were surrounded by the Euro-Britannian army on the way to recapture Sankt Petersburg. During the operation, Leila confronted Anou over his last minute decision to add self-destruction devices to the Alexanders for suicide attacks, goading Anou into attacking her. She disables him and has him removed from his command position, allowing her to deactivate them, but by then only Akito had remains. After the success of the operation, she was promoted to the rank of Lieutenant Colonel by General Smilas and given direct command of the wZERO Unit.

Leila received her Geass from an encounter with C.C. when she was a child. Though rather than entering a contract with her, she was given a choice of whether or not she would use it, and if she did not use it before adulthood, the power would disappear. Her Geass manifests in her left eye. According to the Caretaker of Spacetime it is a "fragment of Geass" due to laying dormant for so long, which gives it a unique blue colour. Leila's Geass is the power to connect minds, born from her desire that both friend and foe could understand one another.

It is hinted that Leila harbours feelings for Akito and she cares deeply for him. It is first implied during their first battle, with Leila blushing when Akito tells her to stay behind him. She appears disappointed and slightly embarrassed when he clarifies that it's because there are still drones in her control that haven't been destroyed.

She also trusts him enough to talk to him about her disappointment in herself at being unable to help at the Gypsy camp. She also confides in him about her past and how she had felt helpless the night her parents died, as well as how even after being orphaned she was raised in a life of privilege and never learned to be independent, which is why she wants to have the power to live on her own. After one of the dinners at the camp, she walks the Great Granny to her bed, who says she is a nice girl and offers to read her future; Leila accepts and watches as she does the reading. The Great Granny reveals that she (Leila, right after her mother died) met a witch in the woods that gave her a great power which she will use to save someone dear to her (hinted to be Akito). During their farewell party at the Gypsy camp, they are invited by the rest to dance with them. Akito angrily leaves the campfire, causing Leila to run after him. Ayano tries to follow after them, but Ryo blocks her path with a knowing look on his face. In the woods, when Leila catches up to Akito, he reveals to her his fear and hatred of his brother and tells her the story of what happened the night his entire clan was killed by his brother and how he should have been dead; he then proclaims that he will return the favour and kill his brother. Leila then proceeds to hug him and tells him that she is very happy that he lived because she would not have met him otherwise, blushing when he smiles at her. After their talk, they return to the camp and dance together, but unbeknownst to them the Great Granny was watching them sadly. Later, after they board the plane to leave Warsaw, she tells him that she's going to miss the gypsies, but he doesn't answer immediately, causing her to look away sadly. He tells her that he hopes they can all go to Japan someday, making her smile.

When the Wyvern Squad appears to all have died in battle, Leila is distraught, falling to her knees at her command post and calling Akito's name in disbelief. She manages to pull herself together to set defence measures in place and stop Shin from infiltrating the base, but later cries privately in her room, only being encouraged to carry on by her subordinates. Later, Akito and the Wyvern Squad return and Shin tries to get him to kill Leila via his Geass. Leila tells Akito that he is better than his brother and that he shouldn't listen to him thus making Akito resist the command through his will and instead he saves her and carries her off to the castle where they prepare for the coming fight, Akito cuts of his braid and gives it to her to bury incase he dies in his Knightmare and his body burns, Leila tells him she doesn't want him to die and makes him promise to come back alive with all their comrades because there are important things she hasn't said to him yet.

After the battle is won and their entire squad goes to live in the Gypsies' camp, Leila looks over a cliff while Akito asks her if its a good idea living there. Leila says its a happy place and Akito agrees saying everyone is his family now and he is happy with them, he calls her Leila, blushes and reaches out to take her hand so they can walk back to their waiting family Leila takes his hand and they kiss confirming their love for each other while their family laughs and calls them over.

Anna and Leila both are childhood friends, they have been friends since Leila got adopted by the Malcal family, they met at the academy they were both enrolled in before they began their service at the EU Military. Anna and Leila both care deeply for each other's well being. While Leila simply expresses her worries, Anna cries, even when Leila is simply in a difficult situation where her life isn't in any danger.

A Young Leila with a green-haired, hooded figure.

Leila dressing her pilot suit in the movie

Leila dressing her pilot suit in the promotional trailer

Little Leila and her mother.

Leila's Geass given by C.C.

Leila and her family portrait.

Character design of Leila and sketches of Akito Hyuga 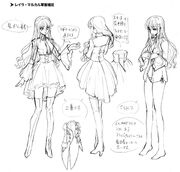 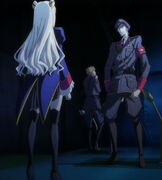 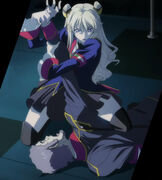 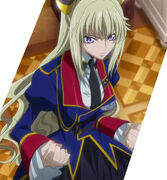 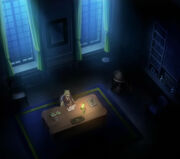 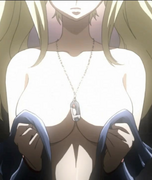 Lelia with Akito after the battle.