The Lancelot siN (ランスロットsiN) is the successor to the Lancelot Albion that appears in Code Geass: Lelouch of the Re;surrection.

A Lancelot designed to go back to the point of being a leading weapon. The name and the design of the Lancelot were known around the world as the favorite machine of Suzaku who served the evil Emperor Lelouch, so it had a bad reputation. However, because the machine's performance as a leading weapon was appreciated, development went underway under the "White Fang" development code. After that, it was authorized to be built by adding "siN" (as in the word "sin") to the Lancelot name. There are rumors that a certain head of a private company was involved in the development, but it is not clear.

The multi-information gathering system equipped in the head.

The defining feature of a 9th generation KMF that besides flying, can also fire blade-like particles as a weapon.

A new type of cockpit improved from the Albion's.

One of biggest features of the machine, equipped from the left shoulder to part of the arm. It's also a huge battery that can deploy a physical defensive barrier in place of the energy hungry Blaze Luminous. Therefore it significantly extends the machine's operation time.

A multipurpose tactical module for the siN.

Following the Lancelot line's design 1 is equipped on each side of the waist and 1 on the tip of each forearm armor.

Another of the biggest features of the machine, it incorporates Black Knight's technology. The Hadron Mode was omitted from the Albion's Super V.A.R.I.S. and now it only has 2 firing modes: Normal Mode and Full Burst Mode. When not in use, it's stored in its compact mount state on the waist Slash Harken's hardpoint.

It was delivered to Zilkhstan via aerial transport and then used in conjunction with its Frame Coat to lay destruction to the hopeless enemy KMF division stationed in the desert. The massacre only ended when Shalio appeared piloting the Nagid Shu Mane to hold Suzaku off. Unfortunately, Suzaku could not keep up with the Nagid Shu Mane's mobility and he was forced to purge the Frame Coat to fight on more equal terms. Their fight lasted for hours and an exhausted Suzaku could finally defeat Shalio only when he went berserk over the loss of his sister and country as the sun rose over Zilkhstan. 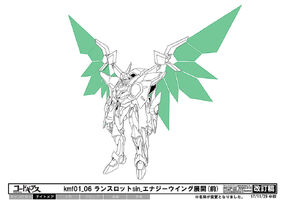 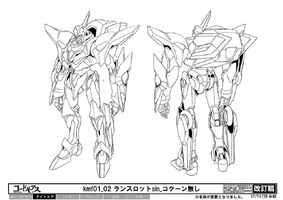 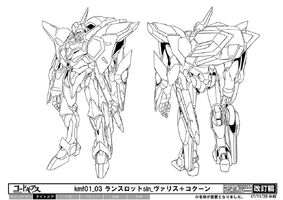 With Cocoon and VARIS 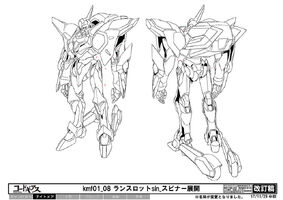 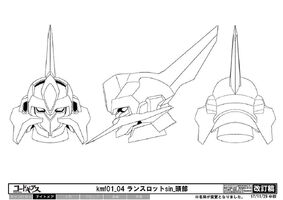 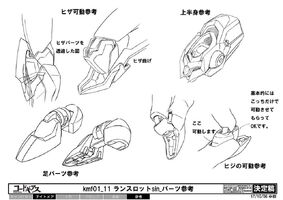 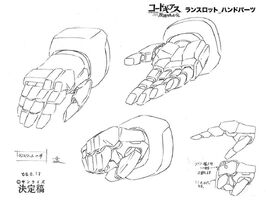 Hand(same design as the old Lancelots) 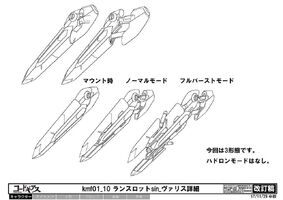 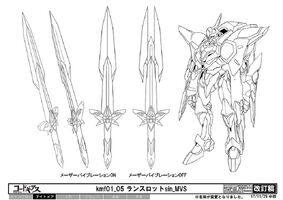 MVS's On and Off Modes/MVS storage attack mode 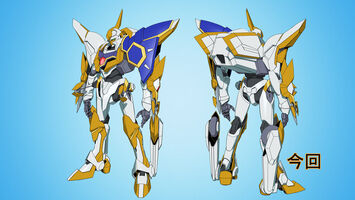 Add an image to this gallery
Retrieved from "https://codegeass.fandom.com/wiki/Lancelot_siN?oldid=78325"
Community content is available under CC-BY-SA unless otherwise noted.