Start a Wiki
The Lancelot Trial is a variant of the Lancelot featured in Code Geass: Oz the Reflection piloted by 88th Princess Marrybell mel Britannia.

With the success of Suzaku Kururugi's Lancelot during the Black Rebellion and other skirmishes in Area 11, plans were made to mass-produce the high-performance Knightmare, the Lancelot Mass-Production Project, later known as the Vincent Plan. The first hurdle hit during the project was that the Lancelot's high specs made it impossible for average pilots to handle. Using spare parts from the original Lancelot, the Lancelot Trial was the first machine built as part of the project. The end result was a powerful high-end machine, even with the reduced specs. Unfortunately, even with the reduced specs, it still proved too costly, and thus the Lancelot Trial was abandoned as a potential mass-produced, and production would move along to a different design, the Vincent.

Despite the reduced specs, the Lancelot Trial possesses all of the same weapons and systems of the original. Other than the red color, the only physical difference between the Trial and the original Lancelot is the different shoulder armor, which would later be used for the Lancelot Grail. 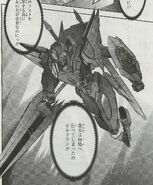 Retrieved from "https://codegeass.fandom.com/wiki/Lancelot_Trial?oldid=69254"
Community content is available under CC-BY-SA unless otherwise noted.