The Lancelot Grail (ランスロット・グレイル, Ransurotto Gureiru), is a prototype mass-production Knightmare Frame developed by Camelot, based on the design and data from Suzaku Kururugi's Lancelot while in Area 11. It was built as the initial prototype for the Lancelot's mass-production model, the Vincent. While possessing decreased overall specs, the Lancelot Grail still has too high an output to be effectively used by ordinary pilots. The only existing unit is in the possession of the Britannian Military's anti-terrorist squadron, the Glinda Knights, and is piloted by Oldrin Zevon.

Although lacking the original Lancelot's Blaze Luminous shielding, VARIS Rifle and Maser Vibration Sword, the Lancelot Grail possesses a new experimental weapon instead: the "Schrötter Steel Swords". Made of a unique alloy known as "Schrötter Steel alloy", the Schrötter Steel Sword not only possesses super-hardness, but also has the property of being able to "clad" accumulated Blaze Luminous energy onto its blade when attached to the Grail's wrist units, thereby turning it into a weapon known as "Sword Blazer". (However, the alloy is still experimental and as such the sword breaks after one use as a Sword Blazer from the accumulated energy.) The Lancelot Grail possesses twelve Schrötter Steel Swords mounted in two cape-like appendage racks attached to its back, with six swords on each side. These racks also have a weapon known as "Sword Harkens", where it fires the swords mounted on the back like a Slash Harken. There are three Sword Harkens on each rack, and each Harken can have a maximum of two swords attached to it. (Presumably, the Sword Harken cannot fire if there aren't any swords attached to the Harken unit.)

Besides the Schrötter Steel Swords, the Lancelot Grail also possesses two Slash Harkens on its hips, and two Factsphere Sensors stored in a compartment on its chest.

The Lancelot also has the ability to dock the Bradford to its back in "Direct Link" mode, thereby forming a combined Knightmare known as the Grail Air Cavalry. It can also link up with the Zetland to use it as a cannon.

The Knightmare Profile of the Lancelot Grail from Volume 1. 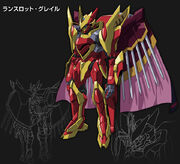 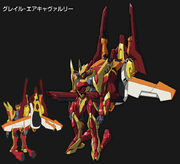 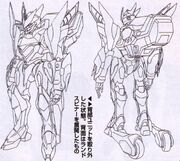 Lancelot Grail Sketch (without back appendages) 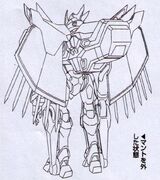 Lancelot Grail Back (with back appendages) 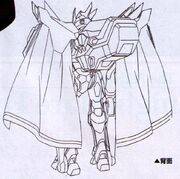 Lancelot Grail Back (with back appendages and cape) 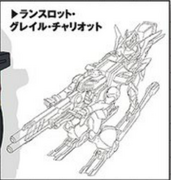 Retrieved from "https://codegeass.fandom.com/wiki/Lancelot_Grail?oldid=73852"
Community content is available under CC-BY-SA unless otherwise noted.