Start a Wiki
The Lancelot Frontier is a Lancelot Knightmare Frame built for the use of C.C. when Lelouch becomes the Emperor of Britannia. It is painted pink to differentiate it from the original.

Despite the weaker performance, it possesses all of the same weapons as the original Lancelot, but also makes use of a missile launcher shield, much like the Percival. 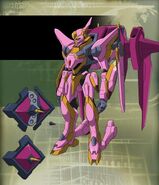 Add an image to this gallery
Retrieved from "https://codegeass.fandom.com/wiki/Lancelot_Frontier?oldid=70659"
Community content is available under CC-BY-SA unless otherwise noted.