In the second season, an updated version of the Lancelot called the Lancelot Conquista (ランスロット コンクエスター, Ransurotto Konkuesutā) is given to the Knight of Seven, Suzaku Kururugi. The Conquista is heavily damaged during the second battle of the Tokyo Settlement, after its encounter with the Guren S.E.I.T.E.N. Eight Elements. The Hadron Blaster is sliced in half, both legs and its left arm are sliced off, and the chest armor is damaged as well.

The Float System backpack is now standard equipment. The Conquista gains a Hadron Blaster, which is mounted on top of the Float System and fired by docking the VARIS rifle to the underside of the larger cannon mount. Its unique Core Luminous has been tuned and refined, increasing its power in battle, and it is equipped with countermeasures that provide a partial defense against the Knightmare-disabling Gefjun Disturber.

The Conquista has an additional three energy shields on its legs and chest. The leg shields increase the effectiveness of its kicks. It also has four secondary emitters on the chest which can form the "Core Luminous Cone", a conical barrier that extends several feet ahead of the Lancelot, as opposed to the flat nature of normal shielding. 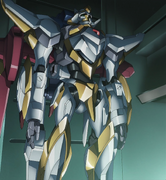 Design 2
Add an image to this gallery
Retrieved from "https://codegeass.fandom.com/wiki/Lancelot_Conquista?oldid=67739"
Community content is available under CC-BY-SA unless otherwise noted.