The Lancelot Albion is a Knightmare Frame used by Suzaku Kururugi in the TV anime series Code Geass: Lelouch of the Rebellion R2.

Developed by Camelot, this newly built frame acts as the 9th-Generation version of the experimental Knightmare Lancelot, succeeding the Lancelot Conquista following it being crippled in the Second Battle of Tokyo. It has mobility and firepower rivaling the Guren S.E.I.T.E.N. Eight Elements that was developed before it. Besides the Guren, the Albion was the series' only other 9th generation KMF. It was the strongest KMF of the Britannia led by Lelouch. A highly elegant machine, it inherits many elements of its predecessors, Lancelot and Lancelot Conquista.[1]Following Lelouch's ascendency to the Britannian throne and Suzaku's appointing as the Knight of Zero, the Albion became Suzaku's new personal unit and remained as such for the remainder of R2.

High mobility driving wheels equipped to the legs of Knightmares. Other than being used during high-speed movement, they perform pivot turns/ultra pivot turns by using the different rotation speeds of the left and right driving wheels (not possible with machines before the Glasgow). In combination with the Slash Harkens, it's also possible to vertically climb the wall surface of a structure.[2]

The Blaze Luminous is a space created due to the super compression of a Coulomb field. It's an energy armor system that applies the breakdown phenomenon. Whereas conventional solid armor sacrifices mobility in exchange for defense, such limitation doesn't exist in Blaze Luminous.[2] The Albion retains both the forearm generators of the original (for defense) and the shin ones from the Conquista (for additional kicking power).

After seeing its first success on the battlefield in the hands of the Guren S.E.I.T.E.N, this new experimental Float Unit was reproduced for the Lancelot Albion, replacing the original Float System used by the Conquista. It was developed by applying Blaze Luminous and Float theory. By oscillating 6 beam wings from the back's base, ultra high-speed flight becomes possible. The beam wings can act as a shield, and, in an improvement over the Guren's wings, the Albion's wings can release dagger-like particles for attack.[3] Because of the Energy Wings' aerodynamic ignoring maneuvers, clear afterimages of the machine can be left behind in the sky as it flies, deceiving the opponent's eyes.[4]

The conventional backward inclination type cockpit of Britannian-made Knightmares is considered to be somewhat inferior regarding the pilot and machine sense of unity compared to the latecomer machines from other factions like the Guren Type-02 that used a forward inclination type. However, it excels in livability and is suitable for long campaigns.[5] It is unknown if the Albion actually has an ejection mechanism, though it is most likely that it does, given Suzaku's survival following his battle with Kallen.

The multi-information gathering system of a Knightmare. It has both an active/passive sensor for microwave band and visible light region in addition to acoustic pickup and a fire control use environmental sensor to provide the pilot with integrated information.[2]

A special tungsten carbide steel spike connected to a carbon wire emitted by a rocket motor. In addition to attacking an enemy machine, it has diverse utilities like climbing and towing. Regarding the ability of a Knightmare pilot, the way he uses the Slash Harken is judged heavily as it's an important weapon.[2]

The Albion's main armaments. This iteration of the V.A.R.I.S. exists as a significant upgrade over the original weapon, being double-barreled compared to its predecessor's single barrel. It is possible to freely adjust the weapon's power. As part of the improvements over the original V.A.R.I.S, it is able to access 3 firing modes: Normal, Hadron and Full Burst, for different purposes. In Normal Mode, it fires solid bolts, similar to the original. In Hadron Mode, the rifle's double barrels separate to reveal a hidden Hadron Cannon. In Full Burst Mode, the rifle's maximum destructive potential is unleashed. In addition to carrying one Super V.A.R.I.S. in each hand, one can be stored on the rear waist when not in use.

Electronic shearing weapon that uses high frequency vibrations. Since it was developed for anti-Knightmare combat, it has the power to cut a Sutherland-class machine's armor in an instant.[2] They are stored in the scabbards to the left/right of the cockpit.

The Lancelot Albion makes its combat debut during the attempted uprising against Emperor Lelouch vi Britannia, which was led by the remaining Knights of the Round. The Albion's superior capabilities allow Suzaku to make short work of the opposition, with the exception of Gino Weinberg, whose Tristan was only knocked out of the fight. It is later involved with Emperor Lelouch's kidnapping of the U.F.N. members, giving him cover as he set his plan in motion. The Lancelot Albion wages its final battle over Mt. Fuji, between the Black Knights and Schneizel against Emperor Lelouch. During the battle, Suzaku is confronted by Kyoshiro Tohdoh in his Zangetsu. Tohdoh fights diligently against the Albion, but his Knightmare is simply no match for it, in addition to having been heavily damaged in the Sakuradite eruption caused by Lelouch. Tohdoh is soon forced to eject, and the Zangetsu is destroyed.

After the Avalon is sunk and seized by Xingke and his men, Suzaku, Lelouch, and a small group of Knightmares head for the Damocles with the intent of boarding it. Using the F.L.E.I.J.A. Eliminator, the Albion, working with the Shinkirō, is able to defuse one of the Damocles' F.L.E.I.J.A. warheads, with most of the group breaking through the opening in the aerial fortress' Blaze Luminous shield. The group makes it inside before being ambushed by Gino in his rebuilt Tristan Divider, the escorting Knightmares and Lelouch's Shinkirō being destroyed in the process.

Suzaku duels with Gino, eventually besting him in combat, but not before he manages to damage the Damocles' shield, allowing Kallen in the Guren S.E.I.T.E.N. to take over. They clash repeatedly, with the Guren's Radiant Wave Surger running out of ammunition and the Albion's Blaze Luminous Generator running out of energy, before finally ending up in a stalemate. The Lancelot Albion takes a critical blow to the chest, and as the Guren loses its arms and head before falling from the Damocles, the Albion is finally destroyed in an explosion. 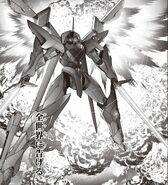 Albion using one of its Super V.A.R.I.S. Particle Rifles

Albion engaged in combat with the Guren S.E.I.T.E.N. Eight Elements

Super Varis in all modes and size comparison with original Varis 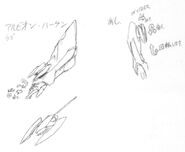 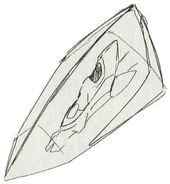 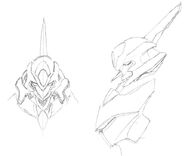