Lancelot (ランスロット, Ransurotto), named after the Knight of the Round Table, is an experimental Knightmare Frame developed by Lloyd Asplund and the Military Engineering Corps. It is the first seventh generation Knightmare Frame ever fielded. The Lancelot outperforms most other models thanks to the heavy amount of Sakuradite scattered throughout its frame as well as in its Yggdrasil Drive, the Core Luminous. As it is still in development, the Lancelot lacks an ejection seat. Its pilot is Suzaku Kururugi.

As a high-performance unit, the Lancelot features a large number of experimental and innovative devices not yet found on its predecessors. The Lancelot features two retractable Factspheres affixed on its chest, two forearm-mounted beam shields (Blaze Luminous), and four Slash Harkens (two on its wrists and two on its hips). These Slash Harkens have experimental thrusters called Harken Boosters which can improve their speed and allow them to change direction midflight. It also sports a pair of Maser Vibration Swords (MVS), which oscillate at a high rate to cut through almost anything. It comes equipped with a VARIS particle rifle (Variable Ammunition Repulsion Impact Spitfire) which can adapt its projectile repulsion output to any situation.

During the European Union Campaign, Suzaku still keeps the Lancelot Air Cavalry with a custom made shield that resemble's the Knight of Honor Emblem honoring Euphemia.

In the second season, Suzaku receives an updated version of the Lancelot called the Lancelot Conquista (ランスロット コンクエスター, Ransurotto Konkuesutā?). The Float System backpack is now standard equipment. The Conquista gains a Hadron Blaster, which is mounted on top of the Float System and fired by docking the VARIS rifle to the underside of the larger cannon mount. Its unique Core Luminous has been tuned and refined, increasing its power in battle, and it is equipped with countermeasures that provide a defense against the Knightmare-disabling Gefjun Disturber. The Conquista has an additional three energy shields on its legs and chest. The leg shields increase the effectiveness of its kicks. It also has four secondary emitters on the chest which can form the "Core Luminous Cone", a conical barrier that extends several feet ahead of the Lancelot. The Conquista is heavily damaged during a battle with Kallen's upgraded Guren S.E.I.T.E.N Eight Elements.

With the Conquista taken out of commission, Suzaku receives the Lancelot Albion (ランスロット アルビオン, Ransurotto Arubion?), a ninth-generation custom Knightmare built specifically for him by Lloyd. Its design differs radically from its predecessors, featuring much more ornamental armor while the head unit is slightly larger. It maintains its previous armament and defenses, but enhanced. The shields are larger, it carries a pair of double-barreled VARIS rifles, and its MVS swords can match Galahad's Excalibur. It uses the same energy wing system used on the final form of the Guren, but with three energy feathers instead of four. The wings can fire dozens of energy bolts over a wide area, each one capable of destroying a Knightmare in a single hit. The Lancelot Albion is eventually destroyed in battle with the Guren S.E.I.T.E.N.

Near the end of the second season, C.C. receives a pink version of the original Lancelot called the Lancelot Frontier. It is slightly weaker than the original version, as it is made from spare and salvaged parts. However, it is equipped with the shield used by the Percival. This version also possesses an ejection system. It is destroyed in battle with Kallen.

Appearances In Other Media

In Code Geass: Lost Colors, the protagonist Rai receives a prototype version of the Lancelot called the Lancelot Club if the player chooses the Britannian military route. Its design combines elements from the Lancelot and the mass-production Vincent. It is equipped with Lancelot's forearm mounted energy shields and Slash Harkens, but features the Vincent's lance-shaped Maser Vibration Swords and shoulder-mounted Factspheres. Suzaku Kururugi also receives an upgraded Lancelot model known as the Lancelot Enhanced.

In the manga spin-off series, Nightmare of Nunnally, the Lancelot was built by the same manufacturer as the Irregular's Alpha units. The Lancelot appears slightly human in shape and is installed with a synthetic and electrical gel with a special wax made from sakuradite and a muscle framing system. Its base metal uses sakuradite with Geass-conducting circuitry. The main weapons are the same as in the anime, but each of them are upgraded to match the Alpha's weapons.

Near the end of the second season, C.C. receives a pink version of the Lancelot, called the Z-01/A Lancelot Frontier. It is slightly weaker than the original version, as it is made from spare and salvaged parts, however, it is equipped with the missile launcher / shield used on the Percival. Ironically this version also possesses a cockpit ejection system, which is intended to preserve the life of the pilot, the immortal C.C.. The Lancelot Frontier is destroyed in combat with Kallen.

In the Nintendo DS game, Suzaku receives an upgraded version of the Lancelot, called the Lancelot Enhanced. This model, like it's predecessor, is a seventh generation Knightmare Frame.

Main article: Lancelot Grail A variant of the Lancelot from the side-story Code Geass: Oz the Reflection, and is piloted by Oldrin Zevon. It bears a strong resemblance in color and design to the red pre-production design of the Lancelot. It was created as a prototype for the Lancelot's mass production model, the Vincent. Its overall specs are have been decreased compared to the original Lancelot, but it is still too difficult to pilot for average Knightmare pilots. It has only two Slash Harkens and two Factsphere, and lacks the Lancelot's Blaze Luminous shielding, VARIS Rifle and MVS. However, it has a new experimental armament instead, the "Schroeder Steel Swords", which are utilized in a variety of ways by the Lancelot Grail, such as the "Sword Blazer" and "Sword Harken".[1]

A variant of the Lancelot featured in Code Geass: Oz the Reflection, it is piloted by Marrybell mel Britannia. Originally developed as a prototype for mass-production of the Lancelot, it was still deemed to be too costly despite its reduced specs. It possesses all of the same armaments as the original Lancelot. It's design is also based of the Lancelot's concept art, possessing the same red and yellow color scheme. 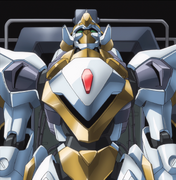 Lancelot in the episode, Battle for Narita

Lancelot unleashing all of its Slash Harkens

Lancelot Grail (from the side-story Oz: The Reflection)

Lancelot in Akito The Exiled

Marrybell deploying in the Lancelot Trial

A 3D rendered version.
Add an image to this gallery

"Marching Ever Onward To Tomorrow" - Lancelot

Retrieved from "https://codegeass.fandom.com/wiki/Lancelot?oldid=53525"
Community content is available under CC-BY-SA unless otherwise noted.