Kyoshiro Tohdoh (藤堂 鏡志朗, Tōdō Kyōshirou), 37 years old and (38 at R2), is a chequered former officer in the Japanese military with the rank of Lieutenant Colonel and the leader of the Four Holy Swords during their stay with the Japan Liberation Front before joining the Black Knights. He is also Suzaku Kururugi's former master.

Tohdoh, despite being a fierce warrior, despises conflict unless he has to be drawn into it. He will only fight to protect those close to him, otherwise will often sit and meditate while patiently looking for a solution on his own time. Because of this, he is against direct confrontation with Britannia. He also prefers to pay respect to any of his enemies, such as Genbu Kururugi, with the possible exception of Zero after he learned of Lelouch's Geass.

As the Britannian Army closes in on them, the organization is eventually scattered to the winds and Tohdoh himself captured. His subordinates turn to The Order of the Black Knights for help, and Zero decides to assist in his rescue to win Tohdoh to his side. Before his execution, Cornelia decides to switch the executioner to Suzaku Kururugi. But, since the Black Knights broke in already, a guard was decided to execute Tohdoh before they could rescue him. Zero manages to arrive in time and convince Tohdoh to join him. He is then reunited on the battlefield with the Four Holy Swords and orders them to cooperate with Zero to finish off the remaining enemies. The Lancelot appears in order to stop them and does so with its Harken Boosters. Since reinforcements were arriving, Zero gave the order to retreat and Tohdoh releases his Gekka's Chaffsmoke to hide their escape. The Four Holy Swords become permanent members of the Black Knights, with each member leading a squad. Tohdoh is made the head of military operations.

He later joins Schneizel during the battle against Lelouch. When Lelouch used the Sakuradite in the Fuji mines, Tohdoh orders all units to deploy their Radiant Wave Shielding. However, even with it, most of the Knightmares are destroyed or badly damaged. His Knightmare, Zangetsu, is destroyed while battling Suzaku in the Lancelot Albion, however the auto-ejection system activates and Chiba manages to catch his cockpit. Tohdoh is gravely wounded following his duel with Suzaku; he attempts to go back to the battlefield, despite Chiba's pleads against doing so. Tohdoh is insistent on returning to the fight, but his injuries ultimately prevent him from rejoining the battle. After the battle, all who opposed Lelouch were captured. He appears along with all that opposed Lelouch and is headed for their execution. Zero (Suzaku) appears to stop that and kill Lelouch, surprising everybody. When Suzaku assassinates Lelouch as the last part of Zero Requiem, Tohdoh looks on in shock, seemingly realizing the true nature of the events. Kallen asserts that Suzaku is the real Zero. He is last seen together with Chiba Nagisa in traditional Japanese attire in a photo of Kaname Ohgi's wedding with Villetta Nu.

Tohdoh trained Suzaku in the ways of the sword and is one of the few who knows he killed his father.

Tohdoh is a skilled commander and leader as seen during his times in the Japan Liberation Front and the Black Knights turning almost impossible situations into a victory. One such situation was the miracle of Itsukushima were he succeeds in driving back Britannian forces without the use of a single Knightmare. However, with a Knightmare, he is very skilled and is able to go on par of that of Suzaku Kururugi and other highly skilled pilots such as Guilford and Xingke. It is further proven with the Black Knights assessment giving Tohdoh 100 out of 100 for his combat ability. 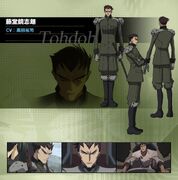 Add an image to this gallery
Retrieved from "https://codegeass.fandom.com/wiki/Kyoshiro_Tohdoh?oldid=75675"
Community content is available under CC-BY-SA unless otherwise noted.