Start a Wiki
Kyoshiro Tohdoh uses a customized Gekka with two red hair-like appendages flowing from the back of the head. His variant sports a black paint scheme and has in its possession a unique version of the Revolving Blade Sword called the Brake Sword. Tohdoh pilots a new unit called the Zangetsu in the second season, his custom unit having presumably been captured or destroyed during the Tokyo Rebellion in the first season.

Tohdoh's Gekka differs from the Guren Mk-II in several ways and is very similar to a regular Gekka albeit with a higher power output. It has black armor as opposed to red, and the head unit has been replaced with a monoptic model. It doesn't possess a radiation emitter, either, and the cannon embedded in the left arm has been replaced by an optional, fully-automatic rifle capable of bringing down Knightmare Frames as well as faster objects like missiles and airborne ordnance carriers. Its primary weapon is the Seidoutou (Brake Sword), a variant of the Katen Yaibatou. It is an elongated, heated chain-sword meant to shear through Knightmares with greater ease than with conventional blades. It also has a mounted Slash Harken on the pommel of the handle as well as several thrusters on the back of the blade allowing it to manipulate the direction of the slash or maneuver the knightmare itself. Tohdoh's Gekka is also equipped with a "Chaffsmoke" dispenser, which enables dispensing of both chaff and a smokescreen. This permits both jamming of electronic equipments and disturbance of visual tracking, allowing for relatively stealthy retreats. 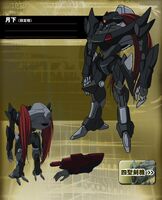 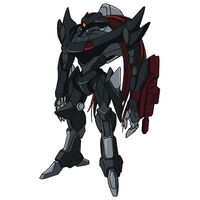 Tohdoh's Gekka armed with its Custom Handgun
Add an image to this gallery
Retrieved from "https://codegeass.fandom.com/wiki/Kyoshiro_Tohdoh%27s_Gekka?oldid=76685"
Community content is available under CC-BY-SA unless otherwise noted.