The Kyōto House, officially the "Six Houses of Kyōto" (キョウト六家, Kyōto Rokuka) is an organization of elite Japanese industrialists and plutocrats, who the Britannian Empire left in charge of running Japan's major industries, particularly its Sakuradite mining operations. Publicly, it was known as NAC.

After conquering Japan, Britannia left Japan's major industries in control of indigenous local industrialists, who ultimately answer to Britannia's occupation authorities, based on the principle that the economy would run more effectively if managed by collaborationist local industralists rather than by Britannia directly. While many Japanese despise the Kyōto House as collaborators, the members of Kyōto House only maintain the public facade of co-operating with Britannia.

In reality, the six wealthy industrialist families of Kyōto House are using their position to secretly obtain funding for anti-Britannian insurgency groups throughout Area 11, particularly the Japan Liberation Front formed of the remnants of the old Japanese military. During the course of the series, the JLF is destroyed and the Black Knights rise to prominence, causing Kyōto House to shift towards funding them as well.

Kyōto House is most notably a producer of Knightmare Frames. They have funded and armed the Black Knights by providing them with the Guren, along with providing both the Japan Liberation Front with the Type-3F Gekka, the Type-1R Burai, and the Type-10R Burai Kai used by the Four Holy Swords.

The organization is led by the Sumeragi House. As per the organization's official title, six families hold seats in the administrative council. Following the fall of the Black Rebellion, all but Kaguya are arrested and executed. It could also be assumed that all of the Kyōto House assets were either seized by Britnania or given over to Britannian companies.

Kyōto House appears in the manga Nightmare of Nunnally under the leadership of Taizo Kirihara and Kaguya Sumeragi. The Kururugi family was former member of the group.

The organization leads the Japanese delegation responding to Euphemia li Britannia's offer to create the Special Administrative Zone of Japan. In response to Euphemia's offer, Kyōto House demands a number of conditions in exchange for supporting the creation of the Special Administrative Zone. Their support becomes particularly critical as Euphemia is nominated to succeed Charles zi Britannia as the 99th Empress of Britannia. 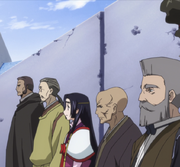 Members of the Six Houses of Kyōto, from left to right: Tatsunori Osakabe, Hidenobu Kubouin, Kaguya Sumeragi, Taizō Kirihara, Tousai Munakata
Add an image to this gallery
Retrieved from "https://codegeass.fandom.com/wiki/Kyōto_House?oldid=82630"
Community content is available under CC-BY-SA unless otherwise noted.