Knights of the Round Uprising was a small scale conflict that took place in the earliest stages of the Zero Requiem, soon after Lelouch's ascension to the throne.

After Lelouch stops his parents' plan from unleashing the Ragnarök across the world, Lelouch installed himself as the 99th Emperor of the Holy Britannian Empire, with Suzaku Kururugi as his personal knight; the Knight of Zero. However, some within the Empire refused to recognize Lelouch as their new Emperor and set out to usurp him from the throne. Most notable of them were Knights of the Round, who (as it was revealed in final volume of Oz the Reflection O2 manga) were acting with the consent of Schneizel, Cornelia and Nunnally.

A group of the previous Emperor's loyalists, led by the Knights of the Round, are en route to Pendragon, intent on removing Lelouch from power. As they approach, they are intercepted by Suzaku who, behind the controls of the Lancelot Albion and determined to protect Lelouch, unleashes the Albion's power and immediately kills Dorothea Ernst and Monica Krushevsky, 2 Knights of the Round, and destroys all of the participating Sutherlands as well. Gino engages Suzaku with the Tristan, all the while trying to convince Suzaku to leave the fight (Suzaku replies that Gino ought to instead, since he swore loyalty to Britannia). Suzaku disables the Tristan after inquiring whether Gino would prefer remain his and Britannia's ally or would rather become a rebel against him. This conflict of interest will lead Gino to eventually join The Black Knights.

Bismarck Waldstein then faces Suzaku with his Excalibur drawn, refusing to recognize Suzaku's title 'Knight of Zero'. He activates his Geass enabling him to peer seconds into the future that he claims he only ever had to use against Marianne vi Britannia, the former Knight of Six. Knowing this meant the Zero Requiem hung in the balance, Suzaku forcefully activates the "live" Geass command that Lelouch had placed on him, in order to provide him an advantage; Suzaku ends up slicing the Galahad and Excalibur in half in a vicious frontal attack; Bismarck's last word was "Marianne!"

Now with his position as Emperor secure, Lelouch soon announces to the world that the Holy Britannian Empire will join the United Federation of Nations; to the shock of those who were watching the battle. 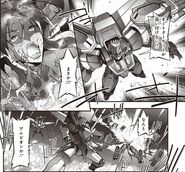 Bismarck's demise (Oz the Reflection O2 manga)
Add an image to this gallery
Retrieved from "https://codegeass.fandom.com/wiki/Knights_of_the_Round_Uprising?oldid=75467"
Community content is available under CC-BY-SA unless otherwise noted.