Kewell first appears as a member of the Purist faction and stands by Jeremiah's side in scapegoating Suzaku Kururugi. He is present during the scheduled execution of Suzaku who is accused of killing Clovis. However, Zero makes an appearance and throws in doubt to the members of the Purist Faction when he has a conversation with Jeremiah and says "Orange" apparently to make it seem that Jeremiah is working with Zero. After the conversation, Zero uses his Geass on Jeremiah and orders him to do everything in his power to allow them to escape. As Kewell was able to fire, Jeremiah stops him from doing so.

When Jeremiah's incomprehensible actions lead to Suzaku's escape with Zero, it causes the reputation of the Purist Faction to plummet as well as leaving suspicions that Jeremiah was bribed in some way by Zero and that they are working together. As a result, Kewell plans to lead a squad of the Purist officers in an attempt to kill Jeremiah. When Jeremiah was informed that Zero appeared, he makes off to his location. However, after arriving he sees that Kewell is there along with members of the Purist Faction. Kewell states that he has to be eliminated in order to restore their status as purebloods. As Kewell had the upperhand, Suzaku appears with the Lancelot to stop them as well as Villetta helping Jeremiah. Kewell then orders his men to fall back as he was about to use a Chaos Mine. In response, Suzaku used the Lancelot's Blaze Luminous to deflect all the shrapnel. Euphemia appears and orders everybody to stand down effectively ending the Orange Skirmish.

Kewell is seen later again during the Battle of Narita. He engages in a fight with Kallen who is piloting the Guren Mk-II. Kallen uses the Radiant Wave Surger on his Sutherland. Unable to eject, Kewell is killed. His last words are expressing his shock and denial at being bested by a Japanese person due to his Britannian heritage. 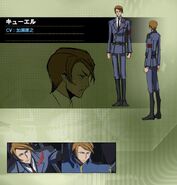 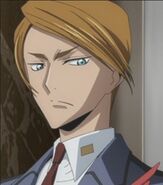 Add an image to this gallery
Retrieved from "https://codegeass.fandom.com/wiki/Kewell_Soresi?oldid=70156"
Community content is available under CC-BY-SA unless otherwise noted.