Kento Sugiyama (すぎやま けんと, Sugiyama Kento) is a core member of the Black Knights, and is the captain of a Special Division.

Kento Sugiyama is a male with teal hair who was a member of Naoto Kozuki's resistance team, before joining the Black Knights. After the formation of the U.F.N., he is given the position of Special Division Captain. He appears to be a good cook, as Lelouch has him make a pizza for C.C. He is last seen in Tamaki's bistro with a guitar resting next to his chair.

Sugiyama first appears alongside the other members of the resistance during the assault of Shinjuku Ghetto. He is one of the few who pilot the Sutherlands that Zero managed to obtain. Sugiyama, along with Kallen, Ohgi and Yoshida decide to meet the person coordinating the attack in Shinjuku Ghetto. All of them meet Zero for the first time being skeptical about why he wears a mask and questions on following him. However, after witnessing Zero, Kallen and Ohgi rescue Suzaku Kururugi from the Purist Faction, they decide to follow him. He later appears when the Black Knights make their first appearance. Before the Battle of Narita, he is seen with Ohgi and the others when they see the Burais and the Guren Mk-II for the first time given to them from the Kyoto House. When Zero announces to the Black Knights that they must fight in order to survive, Sugiyama participates in fighting against the Britannians.

He is seen again later on during the Assault on Tokyo Settlement. He is piloting a Burai alongside Inoue. As he questions on what they should do with Zero gone, he witnesses Inoue's death as her Burai got struck by an enemy fire and exploded, killing her.

In the Battle at Xiaopei, Sugiyama pilots an Akatsuki to repel the Gun-Rus that have been deployed by the Chinese Federation. Sugiyama later witnesses the formation of the U.F.N. and participates in the Second Assault on Tokyo Settlement.

He tells Zero that even Yoshida and Inoue sacrificed their lives for them. With Lelouch backed into a corner, Tohdoh gives the order to fire. However, Rolo appears in the Shinkirō to rescue Lelouch.

Sugiyama later participates in the Battle of Mt. Fuji. After the fight between Lelouch, Schneizel, and the Black Knights, Sugiyama is about to be executed with the other members of the Black Knights, but is saved once Suzaku (as Zero) kills Lelouch. He is last seen in Tamaki's bistro with a guitar resting next to his chair. 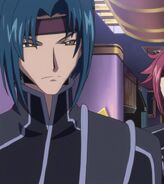 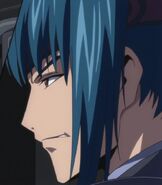 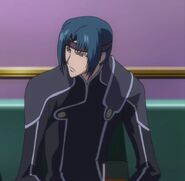 Add an image to this gallery
Retrieved from "https://codegeass.fandom.com/wiki/Kento_Sugiyama?oldid=79752"
Community content is available under CC-BY-SA unless otherwise noted.