First
Imprisoned in Campus
Last
Re;

Kanon Maldini (カノン マルディーニ, Kanon Marudīni), 28 years old, is a subordinate of Schneizel el Britannia and an Earl of Britannia.

As his right-hand-man, Kanon is shown to be extremely loyal to Schneizel. He accompanies him at all times and is quiet and respectful. However, this doesn't keep him from voicing his differences in opinion in certain cases, such as Schneizel's attempted coup d'etat to Emperor Charles, and destroying the Damocles while Nunnally was in unsafe territory. This loyalty stems from their time together in school.

While Kanon is a man of integrity, he is not a rigid person. He is able to hold his ground while remaining friendly and approachable. He seems to be pretty clever too, sometimes to the point of cunning. He has a good sense of humour, which is illustrated by his joke to Milly Ashford about being Schneizel's assistant "in both public and private matters", only to immediately wave it off, unperturbed. Kanon is shown to be a comforting person, especially when Nina Einstein mourns for Shirley.

He says that Schneizel hired him simply because of Schneizel's attraction to strange things, and humbly doesn't speak of his work abilities or flaunt his status.

Kanon is present through most of R2, including the final episode.

Kanon is first shown up in episode 3 of second season, when Suzaku enters battlefield among Britannia and E. U., then he is shown accompanying the second prince to Chinese Federation. From this point, he continues to be seen at Schneizel's side, and is shown having a friendly relationship with Nina Einstein especially comforting her after hearing about Shirley's death and talking about the time they spent together. After Suzaku agrees to meet Lelouch alone at the Kururugi shrine, he is revealed to have followed Suzaku there (alongside the Glaston Knights in order to investigate and capture Zero) and obtains conclusive evidence not only of the masked terrorist's identity, but also the existence of Geass. His presence makes Lelouch believe that Suzaku betrays him.

After the Second Assault on Tokyo Settlement, Kanon and Schneizel come to the Black Knights' headquarters in order to pick up Cornelia and make a truce with them. When the truce was successfully made and the Black Knights agreed to disobey Lelouch, Schneizel then announces his ambition to ascend to the throne of Britannia. Kanon notes that he has finally made up his mind. He is later shown to be among the faction of Britannians who oppose Lelouch and aids the Black Knights During the battle above Mt. Fuji he is against Schneizel's decision to arm the F.L.E.I.J.A. warhead to destroy Damocles as a means of killing Lelouch, calling it terrorism, and shocked that Schneizel would abandon his crippled sister. Regardless, he still follows Schneizel's orders, until Schneizel was Geassed by Lelouch.

Kanon is also slated for public execution along with Tianzi, Xingke, Ohgi, Kallen, and others. They were all released when Lelouch was assassinated by Zero.

In the manga Kanon assumes the same role that he does in the anime.

In Chapter 37: Sky Fortress Damocles of the Code Geass: Lelouch of the Rebellion manga Kanon disputes Lelouch in a last ditch effort protect Scheizel from Lelouch's Geass, mirroring the act Diethard Ried attempted in the anime. Schneizel shoots Kanon though unlike Diethard, the wound isn't fatal, as you see Kanon captured alongside the Black Knights in the last chapter.

In the OVA Nunnally in Wonderland Kanon is seen with Scheizel as the Red Queen.

During the Battle of Mt Fuji, Kanon delivers Cornelia to Nonette where the latter receives treatment at Horai Island after being gunned down by Schneizel. 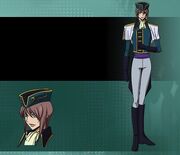 Kanon in Re;surrection
Add an image to this gallery
Retrieved from "https://codegeass.fandom.com/wiki/Kanon_Maldini?oldid=80738"
Community content is available under CC-BY-SA unless otherwise noted.