Code Geass Wiki
Register
Don't have an account?
Sign In
Advertisement
in: Characters, Male, The Black Knights,
and 3 more

Kaname Ohgi (扇 要, Ōgi Kaname), 26 years old (27 at R2), is the leader of a Japanese resistance cell, having taken over after the death of Kallen Kōzuki's older brother, Naoto Kōzuki. After joining the Black Knights, Ohgi gains the position of Deputy Commander and following the restructure becomes the General Secretary. At the end of the series, he becomes Prime Minister of the United States of Japan and he is also married to Villetta Nu.

Ohgi is initially seen as the leader of a Japanese resistance group. However, he admits that leading a resistance group is not a strong point and that he prefers to teach having previously been a teacher. Nevertheless, most of his positions in the Black Knights involve him being higher up in command and usually includes leadership. He deeply cares for the Japanese people especially his comrades as well as even caring for a Britannian, Villetta Nu after she was injured by Shirley Fenette. His pride for the Japanese people is seen throughout the series and during the initial announcement for the Special Administrative Zone of Japan, was one of the few who considered it. However, after the massacre, he is enraged to the point where the Britannians are seen as evil.

After Zero proves himself to be a better leader by defeating the Britannian Army at Shinjuku Ghetto and engineering the rescue of Suzaku Kururugi, Kaname Ohgi gladly hands over leadership of his resistance cell, which later becomes the basis of the Order of the Black Knights. Following the announcement of the newly created Black Knights organization, many Japanese people join them increasing their numbers. Because of it, the Kyōto House gives the Black Knights knightmares to use along with the Guren Mk-II. During this time, they receive information of a Britannian Military operation that is taking place in the Narita Mountains. After arriving and being informed that they must make a miracle at Narita to prove themselves, Ohgi decides to

support Zero. He is seen piloting a Burai along with Zero and Tamaki. When Kallen corners Cornelia, Ohgi appears with Zero and Tamaki once more. However, Suzaku appears with the Lancelot causing a disruption in the plan. With Suzaku present, Cornelia goes up against the trio causing them trouble. After Kallen's fight with Suzaku leads to her Guren's Radiant Wave Surger to become damaged, Zero orders a retreat. Oghi is with Tamaki and Kallen retreating while discussing that the Black Knights are basically leaving the Japan Liberation Front be themselves. However, Ohgi comments that he believes that Zero wouldn't think of them as just chess pieces and that his rage is real, but also knows sorrow.

Following a battle in which the Japan Liberation Front is all but wiped out, Ohgi finds Villetta Nu left for dead at a ship dock. He nurses her back to health, and learns that she has selective amnesia. He seems to recognize that she has seen Zero personally, but can neither bring himself to kill her or use Refrain (Drug) to recover her memories.

After giving Villetta, the name "Chigusa", the two grow closer as time passes and he is unable to decide upon the fate of Villetta. As the two were walking towards Ashford Academy in order to meet a potential member of the Black Knights, they end up visiting the school festival where various events took place. However, it is at the School Festival where Euphemia announces her plans on the Special Administrative Zone of Japan. He harbors hope that Euphemia li Britannia's Special Administrative Zone of Japan will work out. Ohgi is devastated when it seems to be a ruse orchestrated to massacre the Elevens. As Zero gives the order to all Black Knights to rescue the Japanese people, Ohgi is seen rescuing Taizō Kirihara from the Special Zone and bringing him to safety.

During the ensuing rebellion, Ohgi runs the command center at Ashford Academy. Villetta Nu, having recovered her memories, tracks him down and is caught by the guards. Ohgi claims she's an informant and asks to speak to her in private, only to be surprised when she shoots him in the stomach. As the wound isn't fatal, he recovers enough to later order Kallen to follow the Lancelot, which is in turn chasing Zero's Gawain.

Following the failed uprising, Ohgi is arrested and imprisoned. Gilbert G.P. Guilford threatens to execute all 256 captured Black Knights, Ohgi included, in an attempt to draw out Zero. Though the ruse is successful, Zero rescues every prisoner. He claims to bear no ill will towards Zero, stating that Zero alone can liberate Japan and advises to the other members to support him. He appears to still harbor some feelings for Villetta Nu, preventing her from being shot during the opening ceremony for the Special Administrative Zone of Japan when he and all one million participants dress as Zero. She suspects it is him, but he doesn't confirm her suspicions. He bids her farewell as they leave for their self-imposed exile.

Later, Villetta arranges a meeting with Ohgi, intending to kill him to erase her links to the Elevens. Ohgi comes knowing full well what she intends to do, and confesses his love for her. Sayoko interrupts and attempts to kill Villetta, but Ohgi acts as a human shield, taking several throwing knives to the chest. He then tumbles off a cliff, and Villetta leaps after him. They both survive, but Villeta is captured and held hostage by Diethard to ensure Ohgi's loyalty. He appears late into the dedication of the United Federation of Nations, his absence having been excused as oversleeping.

Villetta is set free shortly after the second battle of Tokyo is cut short, and Ohgi believes and leads on the leaders of the Black Knights that Schneizel's claims regarding Zero's treachery are valid. However, he adamantly insists that Japan be freed if they betray Zero, feeling that he couldn't forgive himself if any less came of it. After telling Kallen to inform Zero to come to warehouse 9, he along with the core members of the Black Knights confront Zero. They claim that the Black Knights don't need Zero afterwards, and prepare to kill him. However, Rolo, piloting the Shinkiro, comes to Zero's aid and rescues him. Diethard notes that it is in Ohgi's nature to protect, not lead, and considers his new leadership role a "miscast." He is later seen with the Black Knights shocked at seeing Lelouch's ascension to the throne.

During the battle against Lelouch, he has Villetta stay on Penglai Island, telling her that he was the first to acknowledge Lelouch and that he doesn't want to get new lives involved, as she is pregnant. He then orders the operators of the Ikaruga to evacuate. The battle is lost and he is captured and scheduled for public execution, but is saved when Lelouch is killed by Suzaku dressed as Zero. He marries Viletta at the end of the series, and is elected Prime Minister of the United States of Japan.

Ohgi appears later in the first part of the storyline instead of the beginning and he does not share a relationship with Villetta Nu. He is shown teaching along with Viletta in the end of the manga.

Code Geass: Lelouch of the Resurrection

Like the rest of the main supporting cast, Ohgi is aware of the Zero Requiem's purpose. Ohgi appears as Lelouch vi Britannia arrives to ask Cornelia li Britannia and the Black Knights for assistance to save Nunnally vi Britannia. While not personally speaking of Lelouch, he speaks up in favor of supporting Zero, stating that he did not believe in him when he should have (referencing the Black Knights' betrayal at Schneizel el Britannia's behest), and that he will believe in him now.

At the celebration after Cornelia agrees to support Lelouch, Ohgi gives Lelouch files about Zilkhstan, as well as Kaguya Sumeragi's recording of his wedding, which she wanted Lelouch to have if he was alive. Ohgi then thanks Lelouch for making Japan a better place and giving it back its independence, and prepares to kill himself as punishment for his previous betrayal and not realizing what Lelouch was truly up to when he was emperor. Lelouch stops him, saying that it was all in the past.

Ohgi is partnered with Shinichirō Tamaki during the operation against Zilkhstan. 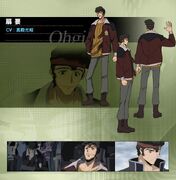 Ohgi piloting a Sutherland when he was in the resistance group.