Kaguya has black hair and green eyes. During the first season, her hair is kept in two ponytails and she wears a pink-ish blouse that has detached sleeves along with a red miniskirt. In the second season, she often wears a long pink dress with red details.

Despite her age and physique, she possesses a strong will and is highly influential amongst the Houses. Kaguya has admired Zero since his debut, and wishes to have his hand in marriage. Nothing anyone says contrary to this desire seems to faze her, including the suggestion that Zero might be sleeping with other women - formed from the idea that Kallen, C.C. and Zero had escaped capture and remained together in secret for a full year - to which she later decides that "A true hero enjoys physical pleasures" and proceeds to suggest that she, Kallen and C.C. are Zero's harem.

Kaguya met Lelouch and Nunnally during their childhood at the Kururugi Shrine, and is Suzaku's cousin. A Sound Drama set in the second season reveals that she was engaged to Suzaku, and was cruel to him because he wouldn't allow her to play with him and his friends at the behest of Taizo Kirihara. Becoming frustrated when Suzaku again refuses to play with her and insists that she studies, she runs off into the nearby forest. There, she runs into Lelouch, who she mistakes for the "demon of the forest", and he permits the misunderstanding to continue. Fearful, she attempts to secure her safety by using the Sumeragi name to intimidate him, which is met with scorn, but he permits her to leave. At this she admits that she does not want to return, because they do not let her do the things she desires, but cannot be anything other than a Sumeragi. Lelouch insults her lack of ability, saying that none would desire such a woman, and that she has no merit. Crying, she flees and runs back to the shrine, and apologises to Suzaku, who comforts her and says that he'll ask his father if she can play with him. At the end of her tale, she says that she believes that she's changed since then. When Zero suggests that he may be a demon, she says that is fine, because the important thing is that she chose him herself.

She appears during the first season during a Kyoto House meeting, hidden behind a screen, and properly introduces herself to Zero just before the Battle Of Tokyo. She offers to be Zero's wife, claiming that she is a goddess of victory, but is rebuffed, as he says that he sold his soul to a devil, and cannot be a goddess's friend.

She is the only living member of the Kyōto House following the Black Rebellion, having managed to escape to the Chinese Federation until Zero's return one year later. She is aboard the Black Knight's submarine when it reinforces Zero, pleased to meet him again. Kaguya later reunites with Suzaku after blocking Schneizel so that Zero won't use his geass and the two talked and Suzaku responded negatively to her sayings such as the Six Houses Of Kyoto's death and Zero's rescue at the Orange Incident. She is later seen during the kidnapping of Empress Tianzi to help her see the outside world that always wanted to see.

When Lelouch is crowned Emperor, Kaguya and the rest of the Black Knights are visibly stunned. After Lelouch installs himself as Emperor the following month, she chairs Britannia's entrance into the U.F.N. She and the others easily see through the fact that Britannia's large population would give it a supermajority vote in the UFN, effectively giving Lelouch control of the organization, and try to get him to limit his vote. Lelouch instead takes her and everyone else present hostage to force the issue. She, along with the other hostages, are later released by Sayoko. Kaguya is later kidnapped by Lelouch, and she is slated for public execution along with Tianzi, Xingke, Ohgi, Kallen, Schneizel and others. They're all freed when Lelouch is killed by Suzaku, as Zero. She was one of the few who realized Lelouch's true intentions after his death. She is last seen in Ohgi and Viletta's wedding photo.

Despite her age and physique, Kaguya is wise and skilled beyond her years, managing to score the second highest total attributes rating among the core members of the Black Knights, behind Tohdoh. Specifically, she is the most charismatic member of the Black Knights, second most loyal and second for most intelligent matching Diethard and behind Rakshata.

Contrary to her wiser and more loyal personality in the anime, she ends up playing the role in leading to the Black Knights' betrayal of Lelouch instead of Ohgi and Diethard. She becomes the Prime Minister of Japan instead of Ohgi in the end. She does however display similar attractions towards Zero like the anime. She supports the Black Knights in the first part of the storyline instead of Taizo Kirihara.

Kaguya's role in Nightmare of Nunnally is the same as the anime of being part of the Six Houses of Kyoto but is different since there are no United Federation of Nations. She appears when Zero makes conduct with the Kyoto Group Funding as well as when she and Taizo Kirahara supports Euphemia's position for the throne to Cornelia and Guilford. She appears again when Kallen in her Guren Flight Enabled Version during the chaos over all the areas due to the arrest of all Viceroys declared by Charles and Rolo. Her final appearance would be after the final battle along with Ohgi who is the new leader of the Black Knights, Kallen, and Tamaki saying that Zero has been declared dead at the battle and that they will never get the chance to know his identity as well as his reason for fighting but regardless Japan is free and they have to make negotiations with Britannia by then.

In Code Geass: Nunnally in Wonderland, Kaguya plays the role of Tweedle Dee. When Nunnally reaches a three way fork in the road, Tweedle Dee and Tweedle Dum (Empress Tianzi) appear in front of her. When Nunnally asks them which path leads to the exit, they both point in different directions and then begin arguing with each other over random things. 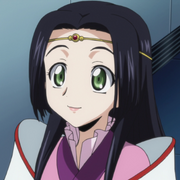 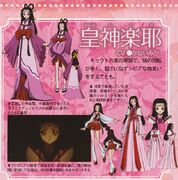 Add an image to this gallery
Retrieved from "https://codegeass.fandom.com/wiki/Kaguya_Sumeragi?oldid=63446"
Community content is available under CC-BY-SA unless otherwise noted.