Kōsetsu Urabe (うらべ こうせつ, Urabe Kōsetsu) was a male member of the Four Holy Swords with blue hair. He appears to trust in Zero more than his teammates. He is one of the few top officers of the Black Knights not captured by Britannia after the Black Rebellion, as well as the first member to discover Zero's identity. He is killed by sacrificing himself by stabbing his sword through his own Knightmare trying to destroy Rolo's Vincent in the battle of Babel Tower to allow Zero (as well as Kallen Kozuki, C.C. and the others) to escape.

Urabe was a member of the Four Holy Swords for his experience as a knightmare pilot. He followed orders under Tohdoh and Zero after joining the Black Knights. Out of the Four Holy Swords, he has been shown to be the most trusting of Zero. This is because after the failed Black Rebellion, Kallen and C.C. decided to reveal Lelouch's identity as well as explain his situation. This trust was put to its ultimate test during his battle with the Vincent. He sacrifices himself while believing that Lelouch can save the Japanese people even though he is not Japanese himself.

Urabe and the Four Holy Swords are given the Gekka to pilot by Rakshata. They break into the prison and rescue Tohdoh. Then, Urabe fights against Suzaku Kururugi with Tohdoh and the others. Tohdoh and the Four Holy Swords knightmares take damage due to the Lancelot's Harken Boosters. They spot reinforcements and Tohdoh gives the command to release the chaffsmoke and escape.

He is seen later on after Euphemia li Britannia massacres the Japanese due to Lelouch's Geass and follows under Tohdoh during the assault of the Toyko Settlement. He is actually not seen at all during the assault, but is mentioned by Asahina when Tohdoh asked him of his whereabouts and said that he was moving on to the energy filler repository.

After the failed rebellion, Urabe was only one of the few who managed to escape. During this time, Urabe found out Zero's real identity and set up a plan to get him back. So, they hide the remaining Black Knights in a commercial blimp and land on top of Babel Tower and initiate their plan by releasing smoke. Urabe deploys with his newly customized Gekka alongside Kallen with her Guren Mk-II and the remainder of the Black Knights with Burais. After Lelouch regains his memories and becomes Zero once more, Urabe and Kallen meet up with Zero and start to destroy the Britannian forces. After most of the Britannian forces inside Babel Tower were eliminated, Rolo came in piloting the Vincent and attacks the Black Knights. After Rolo has dispatched most of the Black Knights, targets Zero next. Knowing that, Urabe and Kallen prepare themselves to protect Zero from Rolo and start to battle each other. However, with Rolo's Geass, it makes Urabe, Kallen and Zero see him going at a fast speed. Zero is almost struck by Rolo, but is intervened by Urabe. Urabe tells Zero that he doesn't care what his background is or if he's just a student, but instead to help the Japanese people. He decides to make the decision to sacrifice himself and turns off the ejection cockpit while apologizing Rakshata for doing so. Then, he uses his Gekka's Revolving Blade Sword (Katen Yaibatou) to commit seppuku on his Gekka in order to take him and the Vincent down together. Because of it, he dies from his Gekka's explosion.

The Death of Kōsetsu Urabe 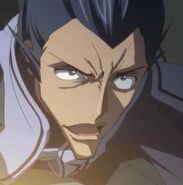 Add an image to this gallery
Retrieved from "https://codegeass.fandom.com/wiki/K%C5%8Dsetsu_Urabe?oldid=73850"
Community content is available under CC-BY-SA unless otherwise noted.