The Japanese Resistance is formed immediately after Japan was invaded by the Holy Empire of Britannia, there are many Resistance group that fought against their Britannian occupiers but with limited success as most Resistance group are poorly equipped, with the exception of the Japan Liberation Front before it was absorbed by the Black Knights.

Kyoshiro Tohdoh is the head of the Black Knights' military operations, and an extremely talented fighter in his own right. He earned the nickname Tohdoh of Miracles for his singular defeat of the otherwise unstoppable Holy Britannian Empire during the invasion of Japan, remarkably managing this feat without the use of Knightmare Frames. This event would later be known as the Miracle of Itsukushima. He was a childhood instructor to Suzaku Kururugi, and is one of the few Japanese people who understands his ideals. Tohdoh is often seen bearing a katana at his side.

Shōgo Asahina is a male member of the Four Holy Swords. He wears glasses and has a distinctive scar down the right side of his face. He is the leader of the first squadron of the Black Knights. Like Chiba, he develops a distrust for Zero following the Black Rebellion, questioning his tendency to keep secrets and bring on new members such as Rolo and Jeremiah with no discussion. During the second battle of Tokyo, he is killed in the blast from Nina's F.L.E.I.J.A. bomb, but not before transmitting information about Zero's massacre of the Geass Order (which in turn came from the Zero Squad lieutenant who participated in it) to prove Zero can't be trusted.

Nagisa Chiba is the sole female member of the Four Holy Swords. Nagisa is a devoted follower of Tohdoh and is enamored of him. A year after the Black Rebellion, she harbors animosity towards Zero for abandoning them. She survives the final battle but is captured along with all the other Black Knights for a public execution. She is released when Lelouch is killed and is seen together with Tohdoh in traditional Japanese attire in a photo of Kaname Ohgi's wedding.

Ryōga Senba was the oldest member of the Four Holy Swords (even older than Tohdoh), and appears to be its leader. He is killed by Gino Weinberg during an assault on a Britannian aerial transport. His last words were that he wanted to see Japan being liberated.

Kōsetsu Urabe is a blue-haired male member of the Four Holy Swords. He is one of the few top officers of the Black Knights not captured by Britannia after the Black Rebellion. In the second season, he participates in the attack on Babel Tower to retrieve Zero, sacrificing himself to buy the others enough time to escape. Before he dies, he states that he doesn't care that Zero is a Britannian, and urges Kallen to keep following him.

The Six Houses of Kyōto, called Kyōto for short, is a secret society of former Japanese elite aligned against Britannia. They use the Britannian-sponsored Elevens' self-governance council NAC as their public face. They provide support for anti-Britannian resistance groups, the Black Knights in particular, by supplying equipment, weapons, and Knightmare Frames. The Sumeragi House leads the organization. As per the organization's official title, six families hold seats in the administrative council. The council members are: Taizō Kirihara, Hidenobu Kubouin, Tousai Munakata, Tatsunori Osakabe, Kaguya Sumeragi, and Yoshino. After the failed Black Rebellion, all but Kaguya are executed as accomplices to terrorism. The status of the NAC following this is not made clear.

Taizō Kirihara is the founder of Kirihara Industries and leader of the Kyōto House. He is an elderly industrialist who built his wealth upon the mining of sakuradite. During the Kururugi administration, he used his considerable influence to support the government as a behind-the-scenes administrator and was even powerful enough to withhold the news of Genbu Kururugi's death for a time from the nation. Kirihara also assigned Tohdoh to be Suzaku's sensei when Suzaku was young. He was regarded as a traitor to the Japanese people following the Britannian invasion for his public role as an accomplice to imperial colonization. Secretly, however, he manages resistance movements against the colonial government. He came to know both Lelouch and Nunnally while they were living at the Kururugi Shrine. When Lelouch reveals his identity to Kirihara, he grants the Black Knights vital funding and weapons. After the Black Rebellion, he is executed for supporting the Black Knights.

Kaguya Sumeragi is the 14-year-old head mistress of the Kyōto House (15 during the events of R2), and a supporter of the Black Knights. Kaguya is Suzaku's cousin, and met Lelouch and Nunnally during their childhood at the Kururugi Shrine. She is the representative of Sumeragi Concern (皇コンツェルン, Sumeragi Kontserun?), a large conglomerate founded by the Sumeragi House. Despite her age and physique, she possesses a strong will and is highly influential amongst the Houses. She is named after Kaguya, the main character of what is considered to be the oldest Japanese folktale.

The Blood of the SamuraiEdit

The Japan Liberation Front is the largest anti-Britannia resistance group prior to the appearance of the Black Knights, consisting predominantly of former Japanese military personnel. Among their ranks are the Four Holy Swords, an elite unit consisting of Kyoshiro Tohdoh and four of his most devoted followers. After Cornelia takes over as Viceroy of Area 11, her campaigns all but wipe out the Japan Liberation Front. They are reduced to hiding in a sakuradite tanker, and during the midst of a raid launched by Britannian forces against them, a mine set up by Lelouch without the knowledge of the rest of the Black Knights destroys their ship; their death is ruled as suicide. All that remains of their officership following this incident is Tohdoh and the Four Holy Swords. Tohdoh is later captured by Britannian forces, and after he is rescued by the Black Knights at the Four Holy Swords' behest, his group joins them. They serve as squadron leaders in the Black Knights.

The Japanese resistance makes use of the Raikou, a massive coilgun built from four Glasgows or the Burai variants. It fires a high velocity shell which releases two-dozen ball bearings that tear through Knightmare Frames with ease.

The Burai s a remodeled version of the Glasgow manufactured by the Kyoto House and used by the Black Knights and the Japan Liberation Front.

The Burai Kai is an optimized version of the Type-1R Burai, the Burai Kai is created for the Japanese Liberation Front's elite unit, the Four Holy Swords.

Designed and developed after the conquest of Japan/Area 11, the RPI-13 Sutherland is in many ways a refinement of its predecessor, the RPI-11 Glasgow. The Japanese Resistance captured many Sutherland or obtained through illicit ways and painted it with a brown color scheme 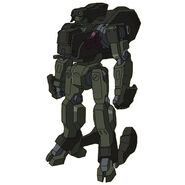 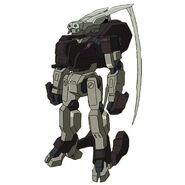 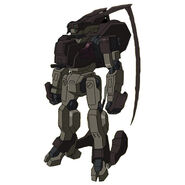 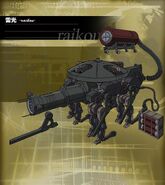 Japanese Resistance
Add an image to this gallery
Retrieved from "https://codegeass.fandom.com/wiki/Japanese_Resistance?oldid=72921"
Community content is available under CC-BY-SA unless otherwise noted.