Start a Wiki
The Holy Order of Michael is one of the four chivalric orders of the Euro Britannia under the command of Grand Master Shin Hyuga Shing after killing the previous leader, Michele Manfredi. They are considered to be the most influential, and perhaps the most powerful, of the four holy orders.Their main headquarters is located in Istanbul, and they have a number of military base locations such as the Dnieper Upland in Ukraine.

It was the Holy Order of Michael Knights, under Shin Hyuga's leadership, which organized a Coup d'état against the commanding structure of Euro Britnnina, and a planned rebellion on the Britannian homeland, events which ultimately lead to Euro Britannia having to allow intervention from the main Holy Britannian Empire into its affairs.

Their color scheme seems to be primarily red, with white and gold markings.

Soon after, Shin assigns Ashley Ashura and his "Asura Strike Team" with the task of engaging the W-0 Unit in the town of Slonim. Despite having the element of surprise, ambushing the E.U Alexanders at every opportunity, the team was initially outmatched by the W-0 Knightmares advanced design and combined with Akito's Geass bloodlust ability affecting the other Wyvern squad members, the battle quickly went against the their favor with a number of its units being destroyed, one member even being killed attempting to save squadron leader Ashley's life. During the battle, Shin Hyuga Shing and his Knight Jean Rowe were observing the wZERO 's and Michael Knights efforts, Shin eventually decides to intervene with his personal Knightmare, the "Vercingetorix" which brings Akito's berserk spree to an end, leaving the other Wyvern squad members weakened and confused. The remaining Knights seize this opportunity and rally against the Alexanders destroying most of them, however, the Michael Knights were forced to withdraw from Slonim due to the arrival of the E.U reinforcements which the W-0 was diverting attention from, resulting in Slonim being liberated, and a Britannain defeat.

Sometime later, after the arrival of Julius Kingsley and Knight of Seven Suzaku Kururugi to oversee the Euro Empires military operations, the Holy Order of Michael under Grand Master Shin leadership attempts a sort of coup d'état against the Euro Britannian government. Their first target was that of Julius Kingsley, after Shin personally pieces together Kingsley's actual identity, to which Suzuaku threatens to assassinate him however a group of Michael Knights lead by Jean Row prevent this and attempt depose of the Knight of Round. Despite Suzuaku's efforts to defend Kingsley identity, defeating the Knightmares single handily with the use of the Lancelot, the two are eventually placed into custody for the duration of Shin’s time as Grand Master. After this, Shin Hyuga continues his coup by targeting the other three Holy Knight orders of Euro Britannia and their respective Grand Masters. The Holy Order of Michael eradicated those of the Uriel and Gabriel Orders, however the Holy Order of Raphael were able to survive this act of treachery by going into hiding, leaving Michael as the only chivalric order left in Euro Britannia. Aware of their current position, Shin used this and recent discovery of Kingsley to his advantage in the governing House of Lords, where he was able to persuade them to transfer full power of the Grand Duke and the Lords over to him and the Holy Order of Michael, making them in full control of the tributary European Empire.

Soon, the Michael Knights would learn of the location of Castle Weisswolf, the W-0 headquarters, and Shin orders most of all the Michael forces to be ready to lay siege to it. Soon enough, 3 massive battalions of Michael Troops arrive via air transport and begin preparations for the assault on the castle. While this is going on, Leia and Klaus Warwick attempt to broker a surrender treaty to Shin and the Michael Knights, but they are ultimately unsuccessful and learn of Shins plan to absorb the world into chaos by launching an attack to destroy the Britannian capital Pendragon. However, the Michael garrison moving towards the castle would come under a devastating surprise aerial attack when W-0 pilot Yukiya Naruse on board the remains of the ARK ship dropped an armed F.L.E.I.J.A. device on their location. Even though they immediately returned fire with the use of the Canterbury cannon amidst the chaos, the Michael forces suffered significant losses in both infantry and Knightmare numbers which lead to the assault being delayed until they could properly re-group and re-arm. Shin himself showed very little remorse for his troops, much to the dismay of the three Michael Swordmasters, and was still wanting to see the castle fall no matter the cost. The next day the Assault of Castle Weisswolf began, despite a weakened attack force Shin Hyuga, Jean Rowe, and the Holy Order of Michael were able to breach through the defenses and storm the castle grounds, where they would engage in their final, and most fierce, battle with the W-0 Alexanders lead by Akito, former Michael Knight Ashley Ashura. After hours of heavy fighting, with loses on both sides, the battle would came to an end when Grand Master Shin Hyuga Shing, and his loyal knight Jean Rowe would perish, leaving the Holy Order of Michael without an official leader, and causing an eventual cease fire/surrender term to be brokered with the W-0 forces thanks to Leia's persuasive efforts.

In end, upon the Grand Duke Augusta Henry Velaines returning to power, the Holy Order of Michael appear to be mostly dissolved or suspended from active duty given their recent acts of treachery against not only Euro Britannia, but to all of the Empire at large. The Holy Order of Raphael re-emerge from hiding as the only remaining chivalric order, Andrea adding that Shin and the Holy Order of Michael's actions gave a justifiable reason for the Britannian Homeland to finally intervene with Euro Britannian affairs, marking an end to the sub empire's rain of political independence from the main Empire.

One of their military units is the Ashley Strike Force, composed of seven regular members and led by Ashley Ashura. They pilot custom Gloucester Swordman Knightmares, while team leader Ashley's unit is decorated in full red

St.Micheal colours. Known members of Asura Team are as follows:

The Holy Order of Michael also incorporate Swordmasters among its ranks. They are shown to be leading most of the Holy Order of Michael's ground forces during the Castle Weisswolf assault, presumably being second in command, taking orders directly from the appointed Grand Master. Being elite Knights, they also pilot Gloucester Swordman Knightmares in Michael markings. There are three known Swordmasters within the order:

Beyond the aforementioned members, Jean Rowe appeared to lead a squadron of six Knightmares and foot soldiers that personally served Shin. However, all members of the squad (except Jean, though the Gracchus was heavily damaged) were brutally murdered by Suzaku Kururugi with the Lancelot in an attempt to prevent Julius Kingsley's true identity from becoming exposed by Shin. It's official name, if any, is unknown.

The Holy Order of Michael are shown to be quite formidable in terms of their military strength, having a large arsenal of Britannian military issue Knightmare Frames, and even infantry soldiers at their disposal. In addition to holding a number of Sutherland's and Gloucester's, St Michael also has access to some elite Knightmare Frames such as the highly mobile V-01S Vercingetorix, which was piloted by Grand Master Shin Hyuga, and the unique Gracchus, which was operated by Jean Rowe. Their pilots are shown to be highly skilled than the regular army, both in long range and close quarters combat scenarios, and are seen utilizing a number of unique weapons such as Swords, Battle Axe's, Deployable Shields, alongside the more common weapons such as Assault Rifles and Giant Cannon rocket launchers. They also have access to more powerful methods of fire power, as they are seen using a Canterbury mobile artillery cannon. The full list of weapons and equipment seen being used by the Holy Order of Michael is as follows:

Canterbury - The Knights of St.Michael are seen having possession of a Canterbury mobile artillery cannon. With a design similar to that of the JLF Raikou, a large artillery weapon carried by four support legs the Canterbury was deployed to the siege of Castle Weisswolf to breakthrough the fortress defensive wall, which it was successful in achieving despite the W-0's defense systems. The Canterbury was later destroyed when Yukiya Naruse committed a kamikaze style attack on it with his Alexander Knightmare.

G-1 Base - Being a commanding group within the Euro Britannian military, the Knights of St.Michael have their own G-1 Mobile Command center. It is the same as the regular G-1's, being able to carry up to 10x Knightmares in the cargo hold, and is fully painted in St Michael red color markings.

Headquarters of Knights of St. Michael

Shin and the Asura Strike Team

Gracchus and Knights of St. Michael

St. Michael units at their base on the Dnieper Upland

The Knights of St. Michael's Swordmasters

Landing of the Knights of St. Michael during the Siege of Castle Weisswolf

Knightmare deployment during the Siege of Castle Weisswolf 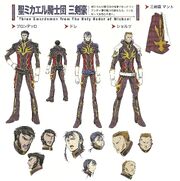 St. Michael's Three Swordmasters design
Add an image to this gallery
Retrieved from "https://codegeass.fandom.com/wiki/Holy_Order_of_Michael?oldid=76506"
Community content is available under CC-BY-SA unless otherwise noted.