The Guren Mk-II (紅蓮弐式, Guren' Nishiki) was a prototype Knightmare Frame model designed by Indian engineer Rakshata Chawla, manufactured by Japan, and built by the Kyoto House. It is radically different from its Britannian counterparts, and its technology is on par with most seventh generation Knightmare Frames, a fact that is a source of pride for its manufacturers. The only existing unit is in the possession of The Order of the Black Knights and is piloted by Kallen Kozuki.

Developed from the prototype Guren Type-01 model, the Guren Mk-II's design and specifications are significantly different from the more common Britannian platform of which Knightmare Frames are usually built upon. For one, it does not appear to house any visible form of Factsphere Sensor, a component which is crucial for gathering tactical data, and which previous Knightmares have been heavily reliant on. Additionally, the Landspinner Propulsion System (renamed as the "Kou Kisou Kudourin-type" of Landspinners) is also noticeably different, as, instead of the traditional two motors being placed onto the sides of both feet, they are built as part of the legs themselves, which can make them less likely to being destroyed or rendered disabled. Unlike Britannian-made Knightmare cockpits, the Guren Mk-II features an unconventional style of Cockpit, in which the pilot seat is shaped in the form of a motorbike seat with the controls and user interface placed directly in front of the pilot, although despite being drastically different it still maintains an emergency Cockpit Ejection System. When not in use, the Guren Type-02 is placed into "Standby mode", in which the head retracts into the center chest. Appearance wise, the Mk-II is almost identical to the Type-01, re-using the armor and body parts, with the main color being a vibrant red although instead it has with light orange parts as its secondary color.

The Guren Mk-II's main weapon is its silver right hand. The hand stands out from the otherwise red-painted mech, terminating in sharp clawed fingers, and it can extend at the base of the elbow for a surprise attack. Stored within the palm of this large hand is the Radiant Wave Surger (輻射波動, Fukushahadō lit. radiation surge), a powerful microwave radiation emitter. By grabbing onto an enemy Knightmare and activating the emitter, the Guren Mk-II can fry the Frame's electronics and heavily warp the frame itself, not only rendering the unfortunate machine completely un-salvageable, but often disabling the pilot's ejection system, usually ensuring that the pilot will perish with its craft. While not designed as such, the Radiant Wave Surger can also use radiation waves for defense as well as attack. It has been shown to block the EM Lances of enemy Knightmares, deflect bullets from Knightmare Assault Rifles, stop incoming Slash Harkens, and can even deflect a shell from the Lancelot's VARIS Rifle. The arm is destroyed however during the Battle of Tokyo, but it is replaced with a slimmer, three-fingered version in the beginning of the second season. The later Gekka models and their iterations were based upon the Guren's technology, using the frame as a basis for development.

Aside from its Fukushahadō, the Guren Mk-II possesses a small fork knife, a machine-cannon on its left arm, and a single Slash Harken mounted on the left side of its chest. It is also equipped with a Chaffsmoke dispensing system, which is located in its back cockpit. The Guren Mk-II's speed and pure strength can easily match that of the Lancelot's, also a highly advanced seventh generation Knightmare, and the two machines have engaged each other in battle numerous times. However, Its lack of long-range weapons make it more of a close-combat model suited for a defensive position when in combat, although Kallen's skill in piloting can make it a formidable offensive weapon.

The Guren Type-02 is first seen in the 10th episode of the series, "Guren Dances", where it is delivered by the Kyoto Group to the Black Knights who quickly put it into active use, with ace pilot Kallen Kozuki being appointed as its primary pilot. It plays a key role during the Battle of Narita where it first uses it's Fukushahadō to disrupt the water table of the mountain, causing a massive mudslide that wipes out most of the surrounding Britannian forces. After single-handedly defeating Jeremiah Gottwald in his Sutherland, and most of the Purist Faction, via the use of its Radiant Wave Surger, Kallen proceeds with the Guren to duel Cornelia in her Gloucester and is about to deliver the final blow but is interrupted by Suzaku piloting the Lancelot. The Guren and Lancelot fight for the first time and although the Guren gains the upper hand, destroying one of the Lancelot's MVS Swords and successfully blocking all of its attacks, the battle is stopped when the Guren falls down a cliff when trying to block a VARIS bullet fired by Lancelot with its right hand. Blocking it ends up damaging the Fukushahadō, which prompts Zero to have the Black Knights retreat.

The Guren Type-02 then finds itself taking part in every one of the Black Knights' operations, becoming their "Ace". The Guren and Lancelot face off numerous times throughout the series with each battle resulting in a draw until the First Battle of Tokyo where the Lancelot has been upgraded with a Float System and is able to defeat the Guren, despite losing one of its arms, by destroying it's Fukushahadō with the VARIS Rifle. Suzaku however is interrupted from finishing Kallen and the Guren off by Lelouch's arrival in the Gawain. After being partially repaired the Guren is taken to Kamine Island by Kallen in pursuit of Suzaku and Lelouch.

In the second season, it is revealed that Kallen managed to escape with the Guren and avoid capture after the failed Black Rebellion and confrontation at Kamine. Both take part in the Black Knight Hotel Incident a year later, the Guren having been repaired and its Fukushahadō being replaced with a three-clawed version. During Operation Pacific Ocean Ambush, the Guren is easily defeated and sent hurtling towards the ocean by the newer Lancelot Conquista's Hadron Blaster which the Radiant Wave Surger arm was unable to fully block. Kallen and the Guren are saved however by Rakshata's newly created Air Glide System which, along with a new type of Fukushahadō, upgrades the damaged machine into the Guren Flight-Enabled Version.

The new Flight-Enabled Version, however, would see a short history after its debut. During the Battle at Xiaopei, it came into battle against its "brother", the Shen Hu. Due to the Shen Hu being a more advanced unit, as well as the Guren being low on power, the unit was captured and turned over to the Camelot Research Group. The unit was then reconfigured into the Guren S.E.I.T.E.N. Eight Elements, the world's first 9th-Generation Knightmare Frame.

The Type-01/C Byakuen is variant of the Guren which appears in the side-story Code Geass: Oz the Reflection, and is piloted by Orpheus Zevon. It is white, unlike the red color scheme of the Guren Mk-II, and features different equipment and a single, long horn. To be precise, it is based on the Guren Mk-II's predecessor, the "Guren Mk-I", which was produced in several numbers in the Militarized Zone of India, and it has been customized for Orpheus' use. Though lacking a Radiation Wave device, it has a series of short and long range weapons integrated into its right arm, for a total of 7. It also has a device known as the "Gefjun Breaker" installed in the horn on its forehead, which is based on the technology of the Gefjun Disturber and can stop the activation of Sakuradite within a 100m circumference in exchange for massive power consumption from its Energy Filler. 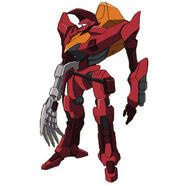 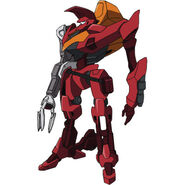 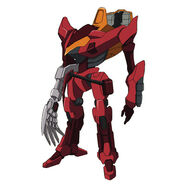 Guren in a fighting pose 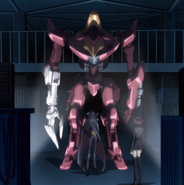 The debut of the Guren MK-II

The Byakuen, from the upcoming sidestory Code Geass: Oz the Reflection

The Lancelot Vs the Guren Type-02 Promotional Artowrk 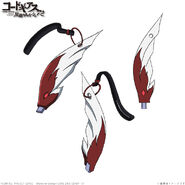 Line artwork of the Gurens cockpit and controls