Start a Wiki
The Guren Type-01 (紅蓮壱式, Guren' Isshiki) is a prototype Knightmare Frame model designed by Indian engineer, Rakshata Chawla, that was produced in several numbers within the Militarized Zone of India. It is the predecessor to the Guren Type-02  that was deployed in Japan by the Black Knights. Also, one of the Guren Type-01 frames was remodeled into the Byakuen and provided to Orpheus Zevon, a terrorist of the organization Peace Mark. Like other Knightmares Frames designed by Rakshata, the Guren Type-01 features an unconventional pilot seat shaped in the form of a motorbike seat, and a helm-like outgrowth surrounding its retractable head. One of these units was captured by the Holy Britannian Empire and subsequently piloted by Britannian knight Dasko la Clermont, before it was destroyed in battle by the Byakuen.

Unlike the Guren Type-02 and the Byakuen, the Guren Type-01 lacks a specialized weapon on its right arm like the Radiation Wave Surger or 7-Type Integrative Armaments Arm, and only possesses an ordinary manipulator hand instead. Otherwise, the Guren Type-01's armaments are nearly identical to the Guren Type-02's, consisting of a Ryogo Otsugata Tozantou fork knife, a 43mm grenade launcher attached to its left arm, and a single Slash Harken on the left side of its chest. The Guren Type-01 piloted by Dasko la Clermont is also equipped with an anti-Knightmare EM Jousting Lance standard to Gloucesters and a standard Assault Rifle.

Appearance-wise, the Guren Type-01 is virtually identical to the Guren Type-02, except for the lack of a Radiation Wave Surger on its right arm, a grey cockpit and upper chest piece instead of orange like the Type-02, a faceplate that is black instead of white, and orange eyes instead of blue.

One model has been taken by Britannia from a chinese resistance group and has been send to the Far East Exchange Center ( in reality a military base ruled by Carine ne Britannia). Her personal knight, Dasko la Clermont piloted it in order to gain as much operational data from it before having to hand it over to Camelot, for the sake of improving her standing in the competition for the Britannian throne. However, Orpheus Zevon's Byakuen crashes into the base during the testing and battles with Dasko in the Guren. In the end, Orpheus corners the Guren and forces it to self-destruct, though Carine and Dasko manage to escape and survive.

In Code Geass: Lelouch of the Re;surrection, one is seen among the forces who have kidnaped Zero ( Suzaku ) and Nunnally at the begining of the movie.

The Type-01/C Byakuen is variant of the Guren which appears in the side-story Code Geass: Oz the Reflection, and is piloted by Orpheus Zevon. It is white, unlike the red color scheme of the Guren Type-02, and features different equipment and a single, long horn. To be precise, it is based on the Guren Type-02's predecessor, the "Guren Type-01", which was produced in several numbers in the Militarized Zone of India, and it has been customized for Orpheus' use. Though lacking a Radiation Wave device, it has a series of short and long range weapons integrated into its right arm, for a total of 7. It also has a device known as the "Gefjun Breaker" installed in the horn on its forehead, which is based on the technology of the Gefjun Disturber and can stop the activation of Sakuradite within a 100m circumference in exchange for massive power consumption from its Energy Filler. 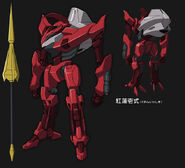 Battle Between Guren Type-01 and Byakuen (Photo Story)
Add an image to this gallery
Retrieved from "https://codegeass.fandom.com/wiki/Guren_Type-01?oldid=74323"
Community content is available under CC-BY-SA unless otherwise noted.