The Guren Flight-Enabled Version (紅蓮可翔式, Guren Kashōshiki, lit. Crimson Lotus Aerial-Type) is an upgraded model of the Guren Mk-II. It was upgraded from the Guren Mk-II after being defeated in battle by Suzaku Kururugi's Lancelot Conquista in mid-battle with the Black Knights. It received a newly developed Air Glide System and it's Armor-Piercing Bombardment-Type Radiation Wave Unit.

The Guren Kashōshiki's most obvious change is the addition of a Air Glide Wing System, allowing it to fly, and aesthetic changes to the head, like antennae on the sides and line-marks on the face. It also gains a new "armor-piercing bombardment-type" Fukushahadō arm which matches the Knightmare's color scheme, though the forearm is still predominantly silver. The new Fukushahadō arm can fire radiation blasts at long ranges or over wide areas while maintaining its close-range blast. The Air Glide Wing add-on comes with an inbuilt missile launcher pack, which loads not only standard missiles, but also chaff smoke bombs and a portable version of the Gefjun Disturber called Gefjun Net. The Lancelot Conquista had countermeasures preventing complete shutdown when exposed to the Disturber, but even it is still slowed down by the surge.

Though the modifications consist mostly of a new head and arm, this upgrade puts the Guren on par with the Rounds' personal Knightmares, and Kallen returns to her place as the Black Knights' ace pilot. Shortly afterwards, however, the Guren faces off against its "brother," the Chinese Knightmare Frame XT-404 Shen-Hu, and is defeated in part by a lack of maintenance which leaves it powerless in a critical moment. Kallen and the Guren are handed to Prince Schneizel el Britannia, who gives the Guren to the Camelot Engineering Corps working under Knight of Seven Suzaku Kururugi. The Corps then massively overhauls the captive enemy machine into the Type-02 Guren S.E.I.T.E.N.. 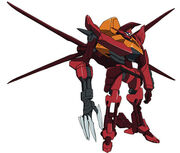 Guren firing at a long range.

Guren firing at a wide range.

The Radiant Wave Surger of the Guren Flight-enabled version

Add an image to this gallery
Retrieved from "https://codegeass.fandom.com/wiki/Guren_Flight-Enabled_Version?oldid=77854"
Community content is available under CC-BY-SA unless otherwise noted.