The Gun-Ru (鋼髏, gānglóu, lit. Steel Skeleton), is a Knightmare Frame both similar to and yet highly different from the common Britannian models. Designated as the TQ-19, it was designed and deployed by the Chinese Federation in an attempt to match the effectiveness and success of Britannia's Knightmare Frames.

Larger than its Britannian counterparts, the Gun-Ru's body is dome-shaped and are commonly painted green with red secondary trim (though fully red-colored versions are seen in the second season, these red variant units are shown to be soldiers who are loyal to the High Eunuchs) with smaller legs and manipulators that fold into the body, giving it an almost frog-like appearance.

The Gun-Ru's main armament consists of a pair of machine guns and a pair of cannons, mounted on the shoulders of the unit. Due to lacking proper body limbs, the unit is incapable of any close quarters, hand-to-hand combat, although it makes up for this with its use of fixed ranged weaponry. Unlike other Knightmare Frames it does not feature a cockpit ejection system, requiring entry and exit from the front. Though much weaker than Britannian Knightmares, the Gun-Ru's are cheaper to produce, allowing the Chinese to rely upon the strength of their numbers when using them in battles.

The Chinese Federation deployed many Gun-Ru's during its attempt to take over Kyushu, the southernmost island of Japan. Initially, even Suzaku Kururugi and his Lancelot were overwhelmed by the sheer number of Gun-Ru sent after him, but the surprise intervention of Black Knight leader Zero in the Gawain turns the tables on the Chinese.

A year later in the second season, it is still shown to be the main Knightmare Frame of the Chinese Federation. Once again, it is used in vast numbers, deployed by the hundreds in the battle between Zero and the Black Knights, and the Chinese Forces led by Li Xingke and the High Eunuchs; their large numbers had prove adept at breaking through formations. A few Gun-Ru were also deployed in the Kagoshima Settlement Battle.

In the second year of the Kowa era, after Lelouch's Zero Requiem plan,in Code Geass: Lelouch of the Re;surrection, one is seen among the forces who have kidnaped Zero ( Suzaku ) and Nunnally at the begining of the movie, and they still used by the UFN, and some are seen during the Black Knights landing in Zilkhstan, in the end of Code Geass: Lelouch of the Re;surrection. 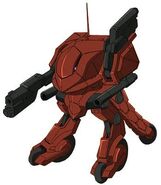 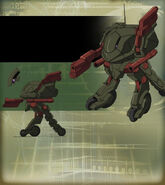 Add an image to this gallery
Retrieved from "https://codegeass.fandom.com/wiki/Gun-Ru?oldid=74324"
Community content is available under CC-BY-SA unless otherwise noted.