Start a Wiki
Guinevere de Britannia (ギネヴィア・ド・ブリタニア, Ginevuia do Buritania) was the First Princess of the Britannian Imperial Family.

Guinevere is referred to as Britannia's Marie Antoinette, due to the fact that she likes to spend her wealth on extravagant monuments and buildings. One of her most notable attributes is a rose tattoo above her left breast. She comes across as a proud woman who looks upon Non-Britannians with disdain. She shows that her family's pride is also very important to her.

Guinevere makes her first appearance in Season 2 after her half-brother Odysseus returns to Pendragon after the failed wedding to Tianzi, the young empress of the Chinese Federation. She regards the failed wedding as an insult to the First Prince, believing that retaliation was in order, though Odysseus personally does not feel offended and only hopes that the Tianzi has not been harmed. Guinevere's comment proves to be little more than an idle threat, as the Prime Minister, Second Prince Schneizel, decides that no action should be taken against the Chinese Federation for the time being. As they discuss the preparations of the war, Guinevere questions Bismarck about Cornelia's whereabouts only to be denied since Bismarck got no answer from Guilford.

One month after the Second Battle of Tokyo and the disappearance of the Emperor, Guinevere appears in the Imperial Court when Lelouch declares himself the 99th Emperor of Britannia after killing Charles. Using his Geass, Lelouch compels Guinevere and everyone in the Imperial Court to accept him as the new emperor. She is then employed as a maid along with Carine ne Britannia.

Guinevere's last appearance in the series 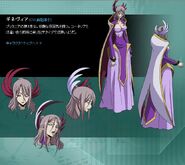 Add an image to this gallery
Retrieved from "https://codegeass.fandom.com/wiki/Guinevere_de_Britannia?oldid=77268"
Community content is available under CC-BY-SA unless otherwise noted.