Start a Wiki
The Gouka Byakuen(業火白炎) is an upgraded model of the Byakuen. It was upgraded from the Rekka Byakuen prior to Peace Mark and the Glinda Knights attack on Damocles.

This variant of the Byakuen as well can be equipped with Air Glide Wings (the weight spec showed here is for the non-flight version). Also it has defense capability due to the Radiation Barrier Generation Devices. It can even use the radiation barrier for attack by linking the left arm and the left shoulder, this function is due to Britannian tech addition. The combine left arm and shoulder also doubles as a giant arm. The Directional Radiation Wave Device (Directed Gefjun Breaker) from the Rekka was improved and became the Radiation Wave Irradiation Device also known as Gefjun Blaster which can now melt Sakuradite in addition of deactivating it. 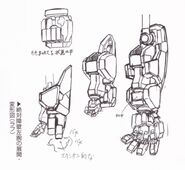 Add an image to this gallery
Retrieved from "https://codegeass.fandom.com/wiki/Gouka_Byakuen?oldid=73827"
Community content is available under CC-BY-SA unless otherwise noted.