The Glaston Knights (グラストンナイツ, Gurasuton Naitsu) are an elite group of Knightmare Frame pilots originally under the command[1] of their adoptive father Andreas Darlton.[2]

After his initial disappearance and resulting death they are led by Gilbert G.P. Guilford. They dress in identical red uniforms and wear visors resembling the faceplate on the Gloucester they originally piloted, which were specially equipped with missile launchers. They later switched to the newer Gareth models prior to the Black Knights' second attack on Japan.

The Glaston knights are introduced in episode 21, having just arrived from the mainland, and are instrumental in defeating the Black Knights during their attempted rebellion in the first-season finale.

In the second season, Alfred and Bart are killed during an attempted execution of the Black Knights captured during the rebellion; Bart's Gloucester is crushed by a G-1 Mobile Base, while Kallen kills Alfred. David and Edgar are killed during the second battle of Tokyo by Chiba (with assistance from Kallen) and Tohdoh respectively. Claudio escapes when the F.L.E.I.J.A. bomb detonated, making him the only surviving member. He is later seen aiding Cornelia's attack on Lelouch's forces after his death while the other resistance attack Marrybell's force after deciding how to deal with the two of them.

The Gloucester's piloted by the Glaston Knights 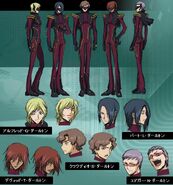 Character Designs
Add an image to this gallery

Retrieved from "https://codegeass.fandom.com/wiki/Glaston_Knights?oldid=74433"
Community content is available under CC-BY-SA unless otherwise noted.