Code Geass: Lelouch of the Rebellion

The Glasgow (グラスゴー, Gurasugō) is a fourth-generation Knightmare Frame and the first mass-production model produced by the Holy Britannian Empire. It actively contributed to the successful invasion of Japan, providing an overwhelming tactical advantage over conventional combat vehicles.

Influenced by the success of the Ganymede prototype, the Holy Britannia Empire begins researching the use of Knightmare Frames for use in military operations. The fruit of their labor was the RPI-11 Glasgow, the first combat-capable Knightmare. Building upon the foundation laid out by the Ganymede, the Glasgow relies upon its small, light weight frame and body armor, and the Landspinners for high-speed combat, allowing it to outflank ground forces such as tanks and APCs.

The Glasgow also introduces the Slash Harken, a wired projectile weapon that can double as a grappling hook, or be used to help the Knightmare descend from aerial transports safely, and becomes standard equipment in almost all Knightmares Frames in the future. The Glasgow's armaments also incorporate an Assault Rifle with built in grenade launcher, Giant Cannon rocket launchers, and Elbow-mounted Tonfas. It is these weapons, along with many others, that would become standard equipment for most mass production Knightmare Frames during the later years.

The effectiveness of the Glasgow is proven when it's deployed during Britannia's invasion of Japan in a.t.b 2010. The Glasgow's participation makes the brief war a complete victory, allowing Britannia to easily defeat the Japanese military forces and take over the island nation, which is then renamed as Area 11. Seven years after the invasion, the Glasgow is still seen as venerable, but very much outdated, and is slowly phased out of production, and military service in favor of the newer 5th Generation RPI-13 Sutherland. Many Glasgow units are refitted into the police issue Knightpolice, while the proliferation of Glasgows means that they often end up in the hands of anti-Britannian rebel groups, such as the Order of the Black Knights and the Japanese Liberation Front, or even in the hands of underground crime syndicates.

Various Japanese resistance cells use a modified Glasgow model called Burai's. Some units were even recycled to form a powerful mobile artillery cannon called a Raikou. Prior to piloting the Guren, Kallen Kozuki used a customized red Glasgow in the beginning of the series, which is damaged in battle against the Lancelot during the latter's first combat deployment, however it is replaced by another modified red Glasgow with Burai parts in the episode Refrain. Further, the reliable Knightmare is used as the basis for several "new" designs, including the Type-1R Burai and Type-10R Burai Kai which were developed by the Kyoto House.

In Code Geass: Lelouch of the Re;surrection, one is seen among the forces who have kidnaped Zero ( Suzaku ) and Nunnally at the begining of the movie.

The RPI-11 Glasgow Security Guard Type is a defensive Glasgow variant that appears in the manga and photo story Code Geass: Oz the Reflection. The Glasgow Security Guard Type's performance is not that particularly different from the regular Glasgow, but it is typically equipped with a giant shield for its function of protection and defense. These frames are mainly stationed in the Britannian homeland.

The RPI-11/SC Glasgow Orpheus Custom is a customized Glasgow piloted by Orpheus Zevon that appears in the photo story of Code Geass: Oz the Reflection. It has been thoroughly tuned up to match Orpheus, and was given to Orpheus by Wizard while the badly-damaged Byakuen was being repaired after the battle with the Guren Mk-I in Hong Kong. In addition to the typically equipped Assault Rifle and Slash Harkens, it is also equipped with a Mark-59 anti-armor combat knife for Orpheus, whose specialty is close combat. Later, it is equipped with a Gatling Gun supplied with a drill known as the "Mince Maker" on its left arm. It has the same white and light-blue color scheme as the Byakuen.

The Glasgow is a combat type fourth generation Knightmare Frame, just like the Glasgow from the original series. It was the primary weapon that Britannia used to occupy Japan and it successfully overwhelmed the Japanese weapons and their forces. After the Glasgow was no longer used by the Britannian Military, it was diverted to the Terrorists that opposed Britannia for independence. 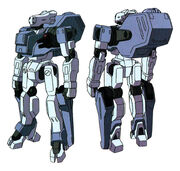 Glasgow(TV ver.) rear lineart
Add an image to this gallery

Retrieved from "https://codegeass.fandom.com/wiki/Glasgow?oldid=74327"
Community content is available under CC-BY-SA unless otherwise noted.