Guilford is a slender, dark-haired, and bespectacled man.

Guilford is a staunch and unwaveringly loyal Knight to the second Princess Cornelia, with a ferocious dedication to her. He has personally risked his life on several occasions to protect that of his Princess'. Like Andreas, he does not appear to be particularly concerned with the rampant racism spreading in the Britannian army regarding Elevens, and treats Suzaku Kururugi with respect.

Guilford is quick-witted and intelligent, making swift use of protocol to step in for the good of his country in the absence of Cornelia, taking charge as steward of Area 11 following the death of its Governor. He is a first-rate Knightmare frame pilot, able to hold his own against enemies such as Tohdoh, and has proved himself superior to Lelouch in Knightmare warfare - Lelouch being unwilling to fight him fairly in a one-on-one scenario.

Guilford's love for his Princess was ultimately revealed to be greater than his loyalty to Britannia. When asked a contradictory question by Lelouch about "evil", Guilford simply noted that his justice lies with his Princess, and much later would be put under Geass to believe Lelouch was, in fact, Cornelia. He turned his back on Britannia in the aftermath, and would assist his "Princess" in fighting his homeland, even apparently giving his life to protect that of Lelouch's after the F.L.E.I.J.A warhead was fired.

Guilford as a knight is very skilled as well as a pilot and commander whose skill matches that of Kyoshiro Tohdoh. As being Cornelia's personal knight, his devotion to Cornelia is unwavering even after her disappearance at the end of the first season. He still continues his devotion to her, because of his faith that she is alive. He is eventually reunited with Cornelia after Schneizel gunned her down.

Guilford first appears in episode five, having helped Cornelia to establish Area 18 before entering Area 11. Shortly after arriving with Princess Cornelia, Guilford informs Jeremiah Gottwald of his demotion. After entering Area 11, Guilford continues to help Cornelia hunt for Zero. He along with Cornelia destroys several rebel strongholds, but finds no clues to his whereabouts.

When Cornelia sets a trap for Zero at the Saitama Ghetto by simulating the conditions in Shinjuku Ghetto and just when she believed that she cornered him, however, Zero, who is actually C.C. who donned Lelouch's Zero costume, reveals "himself" to the Britannian Army, distracting Cornelia from her plans. However, Cornelia orders Guilford to command the Britannian Army to allow Zero to escape, believing that he already has an escape route since "he" revealed "himself".

During the Battle of Narita with the Japan Liberation Front, he squares off against Tohdoh's Burai Kai in his Gloucester. The aftermath of battle at Narita revealed that all the Burai Kai Knightmares had been abandoned, indicating that Tohdoh had been forced to retreat. Gilbert continues to serve Cornelia until she is injured in the Black Rebellion. During the rebellion, he and the Glaston Knights ultimately routed the Black Knights, capturing Tohdoh and many other leading members.

In the second season, Guilford is still waiting for Cornelia to return, as she disappeared after the Black Rebellion. After Viceroy Calares is killed, Guilford serves as temporary Governor-General to Area 11. When Zero returns, taking refuge in the Chinese Consulate, Guilford tries to goad him into a duel by staging a public execution of the captured Black Knights. Zero uses the compartmentalized floor plating to dump the entire contingent of Britannian Knightmares, as well as the prisoners, onto Chinese Federation soil, allowing the Black Knights to easily dispatch the confused Britannians. Two of the Glaston Knights are killed in the battle.

During the attack on Nunnally's transport as she is being taken to Area 11, Guilford unexpectedly arrives piloting the recent mass-production model Vincent accompanied by the remaining Glaston Knights. Though the units prove superior at first, largely due to their flight capacity whereas the Black Knights' Knightmares were confined to the ship, Kallen Stadtfeld turned the tables with her upgraded Guren Flight-Enabled Version, using its long range radiation blast to destroy two more of the Glaston Knights' Gloucesters and Guilford's Vincent, injuring him before he manages to eject. He is seen piloting another Vincent during the opening ceremony for the Special Administrative Zone of Japan, where he is angered by Suzaku Kururugi's refusal to order an attack on the crowd after they all dress as Zero to spurn Britannia.

Prior to the second battle for Japan, Lelouch uses his Geass to make Guilford believe that he is actually Cornelia, turning Guilford to his side. He follows his orders and accompanies him back to the Tokyo Settlement where the second assault would begin. During the midst of the battle, Lelouch orders Guilford to attack the Britannian forces and to kill Suzaku Kururugi which confuses him. However, still believing that it is Cornelia, obeys the order and begins attacking. Guilford sacrifices himself to push Lelouch (whom he still believes to be Cornelia) outside of the blast radius of the F.L.E.I.J.A. bomb, telling him to live on.

In the episode, The Grip of Damocles, Guilford is revealed to have survived, though at the time, he seems to require a crutch and wears dark sunglasses which cover his eyes. After being revealed to have survived, he is seen next to Cornelia who is recovering after being shot by Schneizel. He still addresses her as princess, to which she replies that he still calls her even if she was not one. During the public execution, Guilford is seen with Cornelia and the remaining resistance members who witnesses Lelouch's death by Suzaku. He is seen alongside Cornelia in a photo of Villetta Nu's wedding.

Code Geass: Lelouch of the Re;surrectionEdit

After joining with the Black Knights himself along with Cornelia help Lelouch save Nunnally after she was kidnapped.

In the Black Knight Route, he finds a rivalry with Rai. 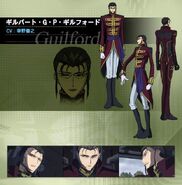 Guilford and the Black Knights 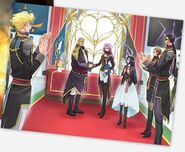 Retrieved from "https://codegeass.fandom.com/wiki/Gilbert_G.P._Guilford?oldid=78504"
Community content is available under CC-BY-SA unless otherwise noted.