The Gekka Custom (ゲッカ・カスタム, Gekka Kasutamu) is a customized Gekka that was originally used by the Black Knights, but was captured by the Britannian Military after their victory during the Black Rebellion. After being sent to the army's research division, this Gekka was then repaired and remodeled due to the request of Fifth Princess Carine ne Britannia's knight, Dasko la Clermont, who then took it as his personal frame. Soon afterwards, the Gekka Custom was destroyed in battle by the customized Glasgow of Orpheus Zevon.

Overall, the Gekka Custom remains the same as the original Gekka, except for being repainted in red and having its arms replaced with those from a Gloucester, in order to better manage and operate Britannian-Made armaments. This modification, combined with the maneuverability that is characteristic of Japanese-made Knightmares, allows for it to do accurate and exact hit-and-run attacks. Its main weapons are a single Slash Harken on the left side of its chest and a "Katen Yaibatou" chain-sword. In addition, it is equipped with a standard Britannian Assault Rifle and an Anti-Knightmare EM Jousting Lance, which Dasko uses as his main weapon. 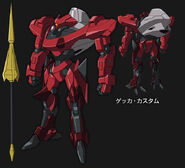 Gekka Custom (Color)
Add an image to this gallery
Retrieved from "https://codegeass.fandom.com/wiki/Gekka_Custom?oldid=70187"
Community content is available under CC-BY-SA unless otherwise noted.