After the success of the Guren, the Kyoto House commissions a mass production version, which would be known as the Gekka. Before the production model is created, genius engineer Rakshata Chawla constructs a prototype version in order to test the viability of the design. This unit only appears in the game Code Geass: Lelouch of the Rebellion - Lost Colors, piloted by the protagonist Rai if the player chooses to join the Order of the Black Knights. It's blue color scheme is the result of Kaguya liking Rai and saw Rai like an ocean.

Performance-wise this prototype is no different from the production model. However, it has a peaky output tendency much like the Guren Mk-II, which turns it into a machine that ordinary pilots find hard to handle.

Its left arm is equipped with an early model of the Guren's Radiation Wave unit. Because it is a simplified version built with spare parts, both power output and energy efficiency are below the Guren's, but it is still capable of destroying ordinary Knightmares with a single burst. The Guren would later use a customized version of this arm during the early battles of 2018, after losing the original one in the battle of Tokyo.

Aside from the Radiation Wave arm, the only real difference between the pre-production model and the finalized Gekka is its distinctive dark-blue color scheme. 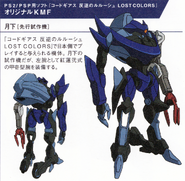 Add an image to this gallery
Retrieved from "https://codegeass.fandom.com/wiki/Gekka_(Pre-Production_Test_Type)?oldid=75611"
Community content is available under CC-BY-SA unless otherwise noted.