Start a Wiki
The Gekka (月下, Gekka, lit. Moonlight) is a new model based on the Guren and the Gekka Pre-Production Test Type. They were seemingly developed for mass production, but only five were produced as prototypes. Using the same motorcycle seat design, this Japanese-made Knightmare is the successor to the Burai Kai and boasts sixth to seventh generation technology, making them superior to Britannia's current mass production models, the Sutherland and Gloucester. The only five existing units are in the possession of the Four Holy Swords and their leader, Kyoshiro Tohdoh.

The Gekka differs from the Guren Mk-II in several ways. It has gray armor as opposed to red, and the head unit has been replaced with a monoptic model. It doesn't possess a radiation emitter, either, and the cannon embedded in the left arm has been replaced by an optional, fully-automatic rifle capable of bringing down Knightmare Frames as well as faster objects like missiles and airborne ordnance carriers. Its primary weapon is the Katen Yaibatou, an elongated, heated chain-sword meant to shear through Knightmares with greater ease than with conventional blades, though it isn't quite as effective as the MVS. The Gekkas are equipped with a "Chaffsmoke" dispenser, which enables dispensing of both chaff and a smokescreen. This permits both jamming of electronic equipments and disturbance of visual tracking, allowing for relatively stealthy retreats.

The Type-03H Gekka, also known as the full moon type, is a metallic light green-colored variant of the Black Knights' Gekka that is piloted by Gassan and his brother in the Oz the Reflection photo novel. Gassan's machine is armed with a Bazooka like the one used by the Akatsuki while his brother's Gekka wields a Katen Yaibatou Revolving Blade Sword. 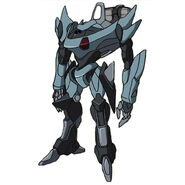 Retrieved from "https://codegeass.fandom.com/wiki/Gekka?oldid=70182"
Community content is available under CC-BY-SA unless otherwise noted.