The Gawain (ガウェイン, Gau~ein), is a prototype Knightmare Frame privately developed by the Zevon Family. It is unusual in that it is approximately 50% taller and more than twice as heavy as most other Knightmares, and features a double-seater cockpit, although it can be piloted by just one person. It also doesn't seem to feature Factspheres or an identifiable ejection system. However, the creation of the Gawain allowed Britannia to develop Knightmares based on it such as the Gareth and the Galahad. Similarly, the Black Knights produced their own Knightmare based on the Gawain, the Shinkiro, for Zero's personal use.

The Gawain is equipped with a prototype integrated Float System, making it capable of sustained flight. It is the first Knightmare to utilize a Float System, as well as the first machine to utilize Hadron weaponry. Its fingers are miniature Slash Harkens, and it features a pair of shoulder-mounted Hadron Cannons, which can emit continuous streams of destructive energy over prodigious ranges. The Knightmare is initially incomplete, and its Hadron Cannons fire erratically due to its blooming effect. The unit is perfected by the Black Knights' scientific mastermind, Rakshata Chawla, who uses her Gefjun Disturber technology to gain control of the Hadron Cannons' erratic firepower. As a side benefit, the Disturber's natural disruption properties also render the Gawain invisible to radar. Its experimental Druid System (ドルイドシステム, Doruido Shisutemu), originally intended to investigate the structure and function of the Thought Elevators, allows the Gawain to plot the probable movements of enemy units, and mark it as a powerful commander unit. Despite its strengths, the Gawain is a fairly slow unit, and as such is easily outmaneuvered by smaller, faster Knightmares, which can be clearly seen when the Gawain and Cornelia's Gloucester fought in battle at the Black Rebellion.

The Gawain was transported aboard the first Britannian airship, the Avalon, in order to ambush the Black Knights (who in turn set an ambush for the Lancelot) with its prototype Hadron Cannons. Shortly after, they moved the Gawain to Kamine Island to study the Thought Elevator. However, before the Gawain could be used for this project, Zero (Lelouch Lamperouge) and Kallen Kōzuki stole the Gawain in order to escape from the Island. Despite the amount of new technology consequently lost, Schneizel dismisses the Gawain’s theft, considering it to be a mere "test model".

After its technology was perfected by Rakshata Chawla, it becomes Lelouch's and C.C.'s personal Knightmare; C.C. handles the piloting while Zero operates the weapons and issues orders. The power of the perfected Knightmare was demonstrated at the Battle of Fukuoka Base, where Lelouch and C.C. briefly joined forces with Suzaku Kururugi to apprehend Atsushi Sawazaki, completely devastating his Chinese allies in battle.

The Gawain later proves instrumental in Zero’s plans during the invasion of the Tokyo Settlement, single-handedly wiping out the totality of Britannia’s air support in the area. The Gawain meets its match, at first, against Cornelia and her Gloucester during their confrontation, only being saved via Lelouch's manipulation of David T. Darlton. The Gawain is later forced into a duel against Jeremiah Gottwald and the Siegfried, the first Knight Giga Fortress. When the Siegfried proves too powerful to defeat, C.C., after dropping off Lelouch at Kamine Island to save Nunnally, is forced to sacrifice the Gawain to stop the Giga Fortress, using its Slash Harkens to entangle the Siegfried and drag them both into the crushing depths of the Pacific Ocean.

Though the frame is damaged beyond repair, its Druid System and Hadron Cannons are salvaged. Both technologies are incorporated into the Black Knights' flagship, the Ikaruga. The Druid System was also adapted by Rakshata to control the Absolute Defense Territory system of Zero’s personal Knightmare, the Shinkirō.

Appearances in other media

The Gawain is also shown as Zero’s personal Knightmare Frame in the Nightmare of Nunnally manga. In this series, Zero expands his armor to materialize the Gawain, and then controls it from within. This version looks visually identical to its anime counterpart.

The Gawain before firing its Hadron Cannons

The Gawain’s size when kneeling compared to the Lancelot.

Inside of the Gawain’s Cockpit.

The Gawain using its Slash Harkens 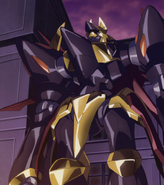 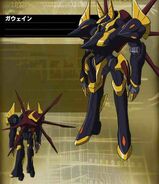 The Gawain Entangling Sigfried with its Slash Harkens 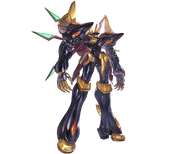