The Ganymede (ガニメデ, Ganimede) was developed during the third generation of Knightmare Frames, it is the brainchild of the rising Ashford Foundation. At least one Ganymede (possibly the same unit used by Marianne) is retained by the Ashford family, kept at the academy it operates in Area 11. This Ganymede would be brought out of storage once a year, for exhibition during the Ashford Academy's school festival. During these occasions, the Ganymede is usually piloted by Marianne's son, Lelouch, but in 2017 a.t.b. Lelouch cedes this role to his childhood friend, Suzaku Kururugi.

At the end of the first season, Nina Einstein fits the Ganymede with a Sakuradite-enhanced nuclear bomb. The bomb, however, fails to explode. The eventual fate of the Ganymede is unknown, but is presumably no longer at Ashford Academy, as the school started using an MR-1 for the annual festival and because, during a discussion, Milly stated that Nina was attempting to "complete" the Ganymede.

Created shortly before the development of the Yggdrasil drive, the Ganymede is powered by a large external battery, limiting its range and operation time. But in spite its failings, the Ganymede forms the basis of practically every Knightmare Frame constructed thereafter. This is due to the effectiveness of the basic design, along with its skilled test pilot, Marianne vi Britannia. Her incredible abilities earned her the nickname "Marianne the Flash", and she would later become one of the many wives of the Emperor Charles zi Britannia. 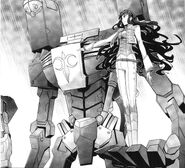 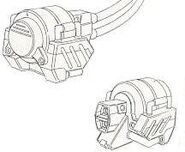 External battery
Add an image to this gallery

Retrieved from "https://codegeass.fandom.com/wiki/Ganymede?oldid=68048"
Community content is available under CC-BY-SA unless otherwise noted.