Code Geass Wiki
Register
Don't have an account?
Sign In
Advertisement
in: Knightmare Frames, Technology, Holy Britannian Empire, Knights of the Round

The Galahad (ギャラハッド, Gyarahaddo), is a Knightmare Frame piloted by the Knight of One, Bismarck Waldstein.

Its armor is light purple and black, and its frame design is a variation of the Gawain's. The Galahad possesses many features similar to the original, such as built-in Landspinners, hands that feature miniature Slash Harkens as fingers, as well as being twice the size of an ordinary Knightmare. It is equipped with energy shielding and carries a Maser Vibration Sword named Excalibur on its back, which is larger than the Knightmare itself. The sword's sheath has an additional Landspinner and serves as the Galahad's Float System. The Excalibur is strong enough to break through armor in a single swing and is capable of generating an energy field that can block and slice through powerful energy blasts, such as those from the Shen Hu's Baryon Cannon. It is so powerful, in fact, that, when it is equipped on the Tristan Divider, one half of the original sword is capable of breaking through the Shinkirō's Absolute Defence Territory. Prior to obtaining the Excalibur, the Galahad used a large lance for combat.

Its output greatly surpasses that of the average Knightmare Frame, and only Bismarck is capable of handling the Galahad.

The Galahad is first seen with Bismarck Waldstein as they prepare for the imminent attack on the Tokyo Settlement. The Galahad along with the Percival engage in a battle with the Black Knights with Xingke as their commander.

The Galahad is destroyed by Suzaku's Lancelot Albion, after the remaining Knights of the Round attempt to remove Lelouch from power. It is sliced in half along with the Excalibur. Although the Galahad is lost, the two halves of its sword land on the ground next to Gino Weinberg's damaged Tristan, and are salvaged for Gino's Tristan Divider.

Close-up view of Excalibur and Scabbard

Galahad being preped for launch with Vincent Wards 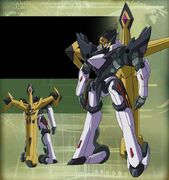 Palomides and Galahad preparing to sortie