The RZX-12TM1 Florence is the transformable and personal Knightmare Frame of the Knight of Twelve, Monica Krushevsky. Salvaged by Britannia after a battle against forces of the E.U., it was originally an AI-Alexander based on designs from Anna Clement before it was modified and given its new name.

The Florence is an Alexander Drone heavily modified by the Toromo Agency of Cambodia. While it was originally controlled by an Artificial Intelligence program, the new incarnation which is the Florence required a living pilot to sit in its cockpit, though this is only one of several changes.

Its chest, arms and legs retain the Alexander's white color, but the shoulders are black and were changed; this might have been done so that the Florence could be fit with a new cockpit, as the original one was rounder and didn't feature the standard Cockpit Ejection System. The head of the Florence was redesigned and now possesses a golden horn. All of its new weapons and a part of the head are green, while its feet, Slash Harkens and shoulders are also accented with gold. It is normally fit with two black cape-like appendage racks sporting golden borders at the bottom, which have to be removed when the Florence is equipped with a Float System.

Like the Alexander, the Florence can change into an Insect Mode, but while the original moves on all fours, it has an additional set of legs which can be utilized instead of its arms or along with them. This way, it can still make use of the weapons on, and in its arms even while moving in its Insect Mode. The extra set of legs is green and appears to be attached to the Florence's waist.

Customized for use by the Knight of Twelve, Monica Krushevsky, the Florence's armaments are heavily modified when compared to the regular Alexander; while it keeps the Uruna Edge knives hidden in its arm shafts, the stake-shaped tonfas have been replaced with large arm-mounted MVS Claws. It also features two Slash Harkens at its waist, and two Hadron Cannons which can variably be fired from above its shoulders or beneath its arms.

The Florence began as a AI-Alexander: a Knightmare controlled by an Artificial Intelligence program. They were used by the W-0 Unit of the Europia United in a battle they fought and lost against the Knights of St. Michael in the city of Slonim; one of these drones was later salvaged by Euro Britannia, given over to the Toromo Agency of Cambodia for modification, and became the Florence. Its new and first real pilot was the Knight of Twelve, Monica Krushevsky.

During its test run, however, Monica was forced to use the Florence to defend herself against an attack performed by Peace Mark terrorists Orpheus Zevon and Ze Dien. In the ensuing battle, Monica was eventually overwhelmed and defeated, leaving her unconscious and the Florence damaged. 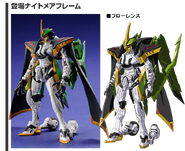 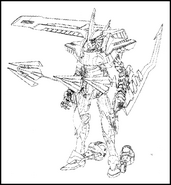 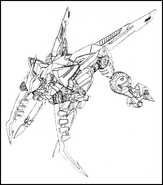 Florence's Insect Mode
Add an image to this gallery
Retrieved from "https://codegeass.fandom.com/wiki/Florence?oldid=68453"
Community content is available under CC-BY-SA unless otherwise noted.