Start a Wiki
Euliya was a former member of the Geass Order and the lover of Orpheus Zevon.

Euliya and Orpheus met during their time at the Geass Order, and helped him endure the hellish days of his time there. In addition, they also met Toto, Clara, and Rolo. At some point in time, the two planned a successful escape from the Geass Order, and fled to an unmarked village in Hungary. There, she learned how to cook and sew from the women of the village, and helped them in making traditionally-crafted embroidery to help the village bring income. Though the two were poor, they were still happy with their new life.

Unfortunately, this happiness would not last. Pluton, under orders from V.V. to kill the two escaped Geass users, attacked the village. During their raid, Euliya was fatally injured protecting Orpheus, and died in his arms. Her final words were telling Orpheus to live. With her death, Orpheus swore revenge on the members of Pluton who had attacked the village.

Some time later, Oiaguro visited with Oldrin and encountered what appeared to be the spirit of the deceased Euliya. 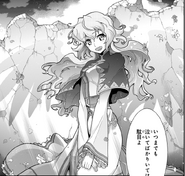 Add an image to this gallery
Retrieved from "https://codegeass.fandom.com/wiki/Euliya?oldid=74979"
Community content is available under CC-BY-SA unless otherwise noted.