Start a Wiki
The Estrella is a Knightmare Frame developed from the Sutherland, and used by the restistance group, the Star of Madrid, in Area 24, formerly known as Spain.

The Estrella is a Sutherland copy tuned for the Anti-Britannian resistance group, the Star of Madrid, in Area 24. While the base is the same, additional armor has been added.

The majority of the units are black, but their leader, Fernando Noriega, uses green for his personal unit, and his sister, Marirrosa, uses red. The overall performance of their units are exactly the same as the rest, though Fernando uses a pair of stun tonfas, while Marirrosa uses a large cannon. 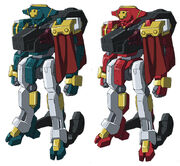 Lancelot fighting Estrellas in the second compilation movie
Add an image to this gallery
Retrieved from "https://codegeass.fandom.com/wiki/Estrella?oldid=73809"
Community content is available under CC-BY-SA unless otherwise noted.