The Energy Wing System is an improvement of the Air Glide System first developed by the Black Knight chief scientist Rakshata Chawla. The design was later perfected by Cecile Croomy of the Camelot research group, and installed into the captured Guren MK II Flight enabled version, upgrading it into the Guren S.E.I.T.E.N. Hakkyokushiki. The only other Knightmare Frames to have the Energy Wing System are the Lancelot Albion, the Lancelot Albion Zero, and the Guren Type Special and Lancelot siN, which appear in Code Geass: Lelouch of the Resurrection.

The theory of the Energy Wing system is that upon oscillating the blaze luminous wings from the base, high speed movement could be achieved. This results in clear afterimages due to the aerodynamic ignoring properties of the system.

The Energy Wing System performs marvelously in combat, enabling the user to destroy multiple enemies in a short amount of time and drasticly dominate the couse of the battles. The Guren S.E.I.T.E.N Hakkyokushiki performed high-speed movements and maneuvers during the Second Assault on Tokyo Settlement when it destroyed in the blink of the eye the Valkyrie Squadron and defeated Luciano Bradley, a member of the Rounds, without trouble. In the other hand Lancelot Albion, which has the same technology, showcases the ability to fire crystalline projectiles from its energy wings, easily destroying four knightmares belonging to the Knight of Rounds and annihilated their personal forces during the Uprising. 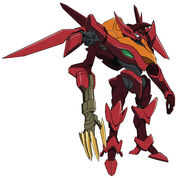 Guren S.E.I.T.E.N. was the first Knightmare frame to use the Energy Wing System 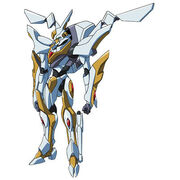 Add an image to this gallery
Retrieved from "https://codegeass.fandom.com/wiki/Energy_Wing_System?oldid=76512"
Community content is available under CC-BY-SA unless otherwise noted.