The Elphaba is a Knight Giga Fortress developed by Britannia. It was given to Marrybell by Lelouch, and used to defend Damocles.

It is similar in design to the Sutherland Sieg. Except, instead of giant lance-type harkens, the Elphaba has two modular hands, allowing it to grab and manipulate objects to its own liking. Other than that, it also possess the Sutherland Siege's 6x 3-tube Missile tubes for range combat. 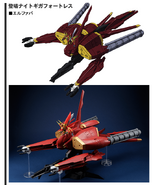