Dorothea Ernst (ドロテア エルンスト, Dorotea Erunsuto) was a member of the Knights of the Round as the Knight of Four.

She is a dark-skinned, blackish green-haired woman who is described as being heroic as Bismark.

She joins Bismarck and the other remaining Rounds members against Lelouch, but she was the first to be killed by Suzaku in the Lancelot Albion. She was never shown with a custom Knightmare, since she was killed while piloting an unshown Knightmare. 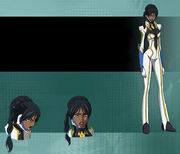 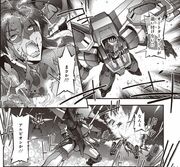 Dorothea's death (Oz the Reflection O2 manga)
Add an image to this gallery
Retrieved from "https://codegeass.fandom.com/wiki/Dorothea_Ernst?oldid=68126"
Community content is available under CC-BY-SA unless otherwise noted.