Code Geass Wiki
Register
Don't have an account?
Sign In
Advertisement
in: Characters, Male, The Black Knights,
and 4 more

Diethard Ried (ディートハルト・リート, Dītoharuto Rīto), 31 years old (32 at R2), was a member of the Black Knights initially as the head of information, espionage, and public relations and following the restructure becomes Secretary of Media and Intelligence before finally defecting to Schneizel el Britannia.

Diethard is a handsome man with blonde hair, which he wears in a long ponytail, as well as bangs that protrude and hang to the side of his face. His eyes are indigo and has a cleft chin. He is always seen sporting a carmine turtleneck. When he was still working for the Britannian controlled media, he complemented his turtleneck with a dark blue suit. After joining the Black Knights he adopts their style, first wearing their standard black uniform before donning a unique military style puce and black suit jacket with red trim, and dark blue pants. He returns to his dark blue suit after defecting to Schneizel.

Diethard is a zealous journalist with unique motivations. The only thing truly important to him is a grand and captivating narrative. He aspires to document and personally witness great history as it is being made. Subsequently, his loyalty extends only to leaders whom he believes will bring great upheaval and alter the course of history. He lacks what most consider to be journalistic integrity, as he has no problem with providing a falsified front to the watching masses. Indeed, he does not really believe in any objective truth, as all information is a product of a subjective human mind. He is virtually without any personal morals, save for his loyalty to his chosen figure of history. He revels in the chaos that Zero wreaks, and only seems to have distaste for stagnancy, such as that of the Britannian aristocracy.

A graduate of the Imperial Britannia Central University's Faculty of Law, Diethard is a former producer and member of the press staff at Hi-TV, a Britannian television station.[1] Following the appearance of Zero and the announcement of his goals, Diethard joins the Black Knights, wishing to witness and document Zero's campaign to overthrow Britannia and rule the world. Like Kallen Kozuki, he shows fierce loyalty to Zero, whom he views as his source of inspiration.

Diethard has proven himself to be highly perceptive, easily picking up on the likely outcomes of Zero's plans. He recognizes immediately that Zero is responsible for the destruction of the Japan Liberation Front's tanker ship, a fact which Zero never made the organization aware especially Specially Administrative Zone Massacre which he was surprised that he never imagined Zero would go this far along with the collapse of the Tokyo Settlement's outer block which he wonders how Zero was able to get the underground collaborators to perform such feat only to realise when he recalls and starts believing in Jeremiah and Viletta's theory and entertains himself that humans are chess pieces and that everything is a game. When Kallen wonders if he can be trusted, Lelouch replies that Diethard is dedicated to making Zero a god, which makes him predictable and thus easy to control.

Despite possessing some knowledge of who Lelouch is and of his power, Diethard remains loyal. Only when Lelouch is exposed in front of the leaders of the Black Knights does he finally betray him. He claims that he would rather have watched Zero topple Britannia, but will settle for a hero's death instead.

Diethard first makes his appearance after the "heartbreaking" memorial speech made by Clovis la Britannia, which turns out to be an act, which he boasts to the other nobles gathered where he transmitted from. He is shown having a conversation with Bartley Asprius about the "poison gas" that was stolen by the terrorists.

Afterwards, he is seen when Zero comes to rescue Suzaku from execution. Following that moment, he fell entranced with Zero and applied for a position in the Black Knights. He gave them information regarding the military operation in the Narita Mountains as well as in Port Yokosuka where the remaining JLF members were, thus earning a limited degree of trust from Zero. After the battle, Diethard was responsible for transforming the Black Knights into a more organized cell-based structure and expanding their intelligence network and security measures.

After Zero rescued Tohdoh and absorbed the remaining JLF members into the Black Knights, Diethard was given the position, Head of Information, Espionage, and Public Relations for the Black Knights. He was the first one to suggest for the assassination of Suzaku Kururugi before he becomes a figurehead for the Elevens. Later on, he was able to convince Kallen to kill Suzaku in order to help Zero in his cause, but Kallen was stopped by Lelouch before she could. Diethard was seen during the Assault on Tokyo Settlement after Lelouch left the Black Knights to fend for themselves, and he was unable to understand Lelouch's current actions.

Diethard reappears after Zero rescues the captured members of the Black Knights alongside Kaguya and Rakshata. He tells Sayoko to go ahead with the plans that they have already come up with.

After Zero and the Black Knights have been exiled, Zero turns his attention to the Chinese Federation. During their escape after they have captured Empress Tianzi, Kallen was captured by Xingke. Despite what Diethard advises to Zero to retreat, he still decides to go for it. But, after his failed attempt they retreat to the Mausoleum of the Eighty-Eight Emperors. Using the media, the Black Knights were able to get the citizens of the Chinese Federation to revolt against the government and the High Eunuchs.

When Schneizel reveals to the core members of the Black Knights, initially Diethard was the one who defended and refuted everything that Schneizel said. But, after the other members agree, he soon follows. As he witnesses the betrayal, he tells Zero that he would have rather have watched him topple Britannia, but then states that show is permantly canceled now. After witnessing Rolo rescue Lelouch with the Shinkirō, he informs all members of the Black Knights that it has been stolen and orders them to destroy it.

Afterwards, Deithard defects to Schneizel, deciding that Schneizel and his plans are more interesting than Zero's. When Schneizel is fooled by Lelouch and made a slave to his will, Diethard flies into a rage, shooting a Geassed officer dead and holding Lelouch at gunpoint, only for him to be shot by Schneizel; Lelouch coldly responds to Diethard that he has no right to deny his existence. In his dying moments, Diethard asks Lelouch to finish him off with his Geass, to which Lelouch responds that he isn't worth wasting it on. 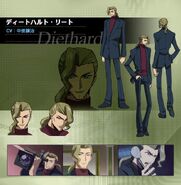 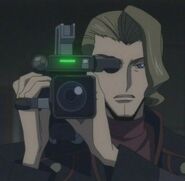 Diethard pointing his gun at Lelouch.