Start a Wiki
Sir Dash (ダッシュ, Dasshu) is a new and mysterious character from the manga Code Geass: Shikkoku no Renya and he seems to be the antagonist of the series, although his intentions remain unknown. He is so far known to be a known and respected officer in the Britannian military.

His appearance is exactly like Lelouch but with much longer hair, a bit more slanted eyes, and is seemingly older. His eyes are purple, and his hair is black. He normally is seen wearing an elegant armor from his own.

Normally he is seen to be a very calm person, who usually sits and read his book. He reveals that he doesn't like fighting, and prefers that his comrades get along with each other. Most of the time, he is indifferent towards his allies, and he rarely shows any emotion. So far, he is interested in both Claire li Britannia and her pendant, the Holy Stone, which Andreas seemed to know as Claire's proof of descending the throne, for unknown reasons. He considers Renya, Andreas, especially Lorenzo and the others as enemies.

He had shown his interest in CC or her power of Geass a lot and seemed to be very familiar with her. He also showed his genuine 'want' for her to join him at times.

it was also shown he was very charismatic where after his death. his subordinates decided to live the rest of their short lives in keeping Britannia safe for dash's sake.

In the past, Dash was an orphan criminal known as "Forest", named so because he moved from forest from forest. He was found by Haltia and Totto in a blizzard, on the brink of starvation. Totto agreed to Haltia's pleading to take him in, intending to use him as a tool to take down the bishops and reinstate his friend Carl as emperor. He was schooled under him, and quickly formed a friendship with Haltia, who was very protective of him.

However, one day he was caught stealing gems from horse armor by Bishop Autti, who blackmailed him into spying on Lord Totto for him. He was told it was to establish a better society, but this was proven to be a cover for burning down the village and accusing Totto of treachery, in order for the creation of a nation centered on the Church. He tried fighting against Autti, but his attention was diverted when Totto was fatally wounded by a soldier. Before passing away, he entrusted Haltia to him, and proclaimed that he was like a son to him. While escaping with Haltia, he was found by U.U., who proposed that a Geass contract be made. With Autti's followers approaching, Forest accepted the contract, gaining the power to suck the lifeforce out of people.

Eventually, his Geass spread to both his eyes and became runaway. With his power now constantly active, he accidentally drained Haltia's lifeforce, almost killing her and leaving her comatose, and leaving him unable to tell her the truth of his betrayal.

He was briefly shown with Geass in both of his eyes when Renya was gaining the curse. Later on, he was mentioned by CC, in which she said to herself that he was getting 'serious'. He is first seen checking an old painting which shows Claire's pendant, which indicates that he is searching for it. Later on, in an unknown castle, he is seen sitting and reading his book, while he talks to his comrades about the being who moves along with the princess, and how to get rid of it. His comrades had shown some hesitation of 'getting rid' of CC, which he admits that they cannot, not completely, anyway. He reveals that he doesn't like fighting, however it is unknown whether he genuinely does not like fights or was being sarcastic.

It's shown that he has killed Renya's father several years ago for the sake of obtaining one of the Holy Stone that Renya's father had. He now pursues Renya to get his Holy Stone. He mentions a set, but it is unclear whether he only needs Claire and Renya's father's, or if there are others.

Dash is shown to have a Geass in both eyes and, in chapter 19, stated that it seemed that his Geass' power appears to be something related to brain structure. It is was shown that his Geass could suck the life force of a person in a undetermined range. where he had eventually lost control of it.

Dash was shown as an adept swordsman, often using swords to fight against his opponents. He was capable of fighting with great skill against Renya during their final duel, giving his opponent a hard time.

Dash has shown a great level of agility, as he was capable of keeping up with Renya during their fight. He is the owner of great physical strength, as he was even able to push Renya back with ease.

Despite appearing to have the same level of recovery as C.C. Dash reveals that he is a failure as an immortal.

Like Lelouch, Dash can be considered a genius, being able to create several different plans to achieve his many goals.

Dash is noted to be the person who is able to create Knightmares, although it is still not completely clear if he creates them through his Geass or if he combines his Geass' power with something else to accomplish it. One example of his Geass is him turning Talia into a Knightmare. It was revealed that as a result of being a failure, he gained the ability to make flesh run wild in the form of knighmares. However, these knightmares' lifespans are greatly shortened

While CC was able to give the power of Geass to a select few she chose, Dash's powers allow him to give the Knightmare power as a 'potential' to those whom he believes requires his help. Like Talia and Mascle, but he also said that only those with a strong willpower are able to use the maximum power to protect what they believe is 'precious'. Talia was what he called a 'failure' as her willpower was not strong enough that she had lost her ability to speak and her past memories which leads her to hurt the same person she wanted the power for, at first. He also seemed to know a lot of Renya's curse and has a 'solution' for it.

Dash and CC are shown to have a rather complicated relationship as they both seemed to know each other and are very familiar with each other. There was a time when Dash drove a rapier through CC's heart, she then kneeled in pain and asked him his intention. He gave an unreadable expression and talked about how she is immortal yet still feels physical pain. He then continues by asking her to join him to stop her 'pain of the heart'. CC and Dash may have had a special relationship as CC always had a distant and sad/sympathetic look whenever she thinks or talks about Dash. She had also said once that her and Dash are the " parts that configure the world ". during Dash's death she shed tears.

Both Dash and CC seemed to have a hateful relationship with Lorenzo as CC had smirked and taunted Dash about how Lorenzo and his Geass power had irritated Dash and that he needed her help to eliminate Lorenzo. 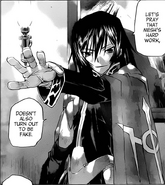 Dash appearance in the manga

Dash with the geass in both eyes

Dash, along with an unconscious Claire

Dash, along with Renya

Dash with fire in the background

Add an image to this gallery
Retrieved from "https://codegeass.fandom.com/wiki/Dash?oldid=77237"
Community content is available under CC-BY-SA unless otherwise noted.