There is a discussion in the fandom ("Lelouch, alive or dead?") which has been ongoing since the end of the series. This discussion has been muddied by misinformation, such as what was or wasn't officially stated by the show staff. Therefore, a list of all the official statements which have been made in regards to the topic of Lelouch's fate at the end of R2 can be found below.

Ichiro Okouchi, "Lelouch dead!? Was it a good one or a bad one!?"


- Still, isn't it possible that defeating the wise ruler Schneizel, the person who was supposed to have brought order to the world, might lead to some [viewers] interpreting it as a Bad End?

Okouchi: That's true. There are probably a lot of people who think of it as a Bad End, a tragedy, considering the protagonist's, Lelouch's end as well. However, Lelouch says in the first episode: "Only those prepared to be shot are allowed to pull the trigger themselves." If you were to think of that as his pride, then I think his getting shot (killed) in the end was a logical end. Of course, I understand that not all of the viewers will accept this ending. There were people who wanted a happier ending, after all.

- Was there a dispute among the staff members regarding the ending?

Okouchi: No. It was decided fairly naturally. During the "Code Geass" script meetings, there are many cases in which there were a number of disputes, but there were barely any when it came to the scripts for (the previous series's) episode 25 and the final episode. I think everyone felt the same when it came to the end of the character that is Lelouch.

- Why were you so bold as to choose this ending when the viewers might see it as a Bad End?

Okouchi: Bold... yes, we were so bold as to chose this ending. Perhaps the show that is "Code Geass" ending up this way was decided the moment Director Taniguchi and I teamed up. I suppose you can call it our sense of aesthetics, or perhaps a part of our psychological makeup.

- I see. So Lelouch's decision was also your, Mr. Okouchi's, and Director Taniguchi's decision.

Okouchi: Which is why I think of both our and Lelouch's decision as Happy Ends. I believe that there will be better things in the tomorrow awaiting Nunnally, Kallen and the rest who have been left behind. And surely Lelouch, who was able to make this into a reality, can only be happy [about this].

Okouchi: From the very beginning, [I/we] never planned on explaining everything. In fact, if you ask me, I think we might have overdone the explanations. While it's undeniable that Lelouch's story has ended with a full stop, the other characters' stories are still on-going, and it's not like the world [of Code Geass] itself has come to an end either. [I/we] didn't want to end it by closing it up for good."[1]

Floating text: "C.C. - Her wish was to die as a human, but after spending time with Lelouch, C.C. also wished for tomorrow. She made up her mind to ensure the tomorrow of the world that Lelouch had left."

- Animage: The ending's outcome turned out as such, but do you think Lelouch was happy?

Okouchi: I think that this (work) was not a bad end, but a good end. This already appeared in Lelouch and C.C.'s conversation in Stage 7 of S1, but people who are 'just' living their lives are uninteresting. Lelouch saved his beloved sister and made the kind world that he envisioned, a reality. His life was not in vain. That's why, Lelouch was smiling in the end."

Okouchi: (...) That end is to Lelouch and to Suzaku both the punishment and the salvation at the same time. It's also connected to the words Lelouch said at the beginning: "Utte ii no wa utareru kakugo no aru yatsu dake da." The person who gave the punishment was punished themselves and if you want to get the salvation, give the salvation first. Of course it's also the same with Lelouch's decision to accepts the geass (wish), because he geassed many people, as he himself has said in the show. [He refers to the last episode when Lelouch says what the people of the world wish for]

- Animage: So you accept the end of the show?

Fukuyama: I think that before he reached that final scene, Lelouch had many possibilities to choose from. But he understood very well what he had done and had to pay the price for that. Suzaku chooses to live as Zero and was awarded the opportunity to pay for his sins by this choice. And Lelouch got his salvation by choosing not the happiness of living on but to sacrifice his own life to create the situation for the world to move forward. If you think about his character, I don't think he would still be himself, if he chose other end. [1]  [2]

Q: "How did Nunnally manage to realize Lelouch true intention, when she touched his hand at the end?"
Staff member K: "The way Nunnally can tell that someone is lying, just like she was able to tell that Lohmeyer was lying to her, is that she can feel the hand of the person she is talking to is sweating or lightly trembling. It's nothing like Geass or some special ability like that."
Staff member Y: "Yes. So, she simply came to conclusion [Lelouch was lying] by herself, because of this ability."
Staff member K: "She is Marianne's daughter and Lelouch's little sister. Two months have passed since that defeat of Schneizel and for this two months she's been wondering constantly about what had happened, like "why it happened?" and so on. So when she touched Lelouch's hand at the end she felt that he is calm, she put the two and two together and realized the truth. Of course, we know that in anime, it's hard to explain things like that, but yeah, please accept it like this kind of "romantic"(*) idea" we had." [3]

(*) the word "roman" is used here. It means something one finds beautiful in general

MyAnimeList interviewed Code Geass producer Koujirou Taniguchi and director Gorou Taniguchi during Sakura-con in April 2019. Following is an excerpt from the full interview:[4]

Why continue the story of Code Geass? How much more of the story is there to tell?

Koujirou Taniguchi: When the TV series ends, we don't know for sure whether the protagonist, Lelouch, is alive or dead. In Japan, the fans more or less came to the conclusion that Lelouch was surely dead... And so now, ten years later, we're "resurrecting" Lelouch.

Gorou Taniguchi: To add, we wanted to make it unclear in the TV series whether Lelouch was alive or dead, to have it be a point of intrigue for our audience. We tried to leave it very vague, but people eventually decided that Lelouch was definitely dead. That wasn't our intention, so we had to come back and clarify.

Koujirou Taniguchi: We all hope that Code Geass will continue. How many more episodes remain in the story will be up to the fans.

"..Knowing that Lelouch does not hate her for giving him the Geass, she is now able to show her true feelings. With the realization of "Zero Requiem", her time with Lelouch, who was able to forgive and accept her, came to an end, but the memories created with him has, without doubt, saved her from eternal loneliness."[1]

The release of the Code Geass movies was accompanied by various Code Geass related events, some of these were live interviews and live commentary. The following are excerpts from commentaries given by Okouchi, Taniguchi-producer and two other producers when they talked about the scene where Lelouch attempted to Geass his father. This was documented by people who were present at these events:


パパんにギアス掛けるシーンも、「これギアス掛かってないのに死んだふりするんだよ」「息子を驚かせようと」「ルルーシュくんかわいそう」「これ一番ショックなタイミング計ってるよね」「絶対笑いこらえてるよ」って色々言われてて笑った。[5]
Translation: About that scene Lelouch geass his dad I laughed because they said like "He isn't geassed, just pretends he dies!" " He tries to surprise his son!" "Poor Lelouch" "He tries to choose the most shocking timing, doesn't he" "I'm sure he tries hard not to laugh"


コウジロウさん「この人、ギアスかかってない じゃないですか。よく我慢してますよね。こことか 絶対笑い堪えてますよ」[6]
Translation: "He isn't under an influence form Geass, is he? He's good with pretending, sure. I'm sure he tries his hardest not to laugh right now."

In light of the release of the 3 recap movies, Ichirō Ōkouchi started a series of tweets called "Geass Memories." In these, he looks back at the days when he and his colleagues were making Code Geass and sheds some light on the production process, gives old anecdotes, and so on.
Following are quotes relevant to the ending:[7][8]

The official Blu-ray release contains the "Zero Requiem movie" which recaps R2.
This ZR movie is the same as R2, but has a 50sec new epilogue.
The old epilogue with C.C. on the hay cart scene is dropped and replaced by a new epilogue where C.C. narrates to the audience while art scrolls past in the background.
C.C.'s narration: "A young man dies. He had the power to change the world, to create a new order. The world feared him, hated him. But, I know he died with a smile on his face. Only those who have realized their dream will truly understand that feeling of utter contentment. So, this is not a tragedy. And whenever I feel sad or cry at night, I sing a song. A song of man's making. Zero Requiem!" [15] 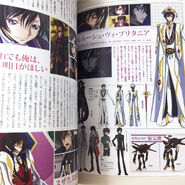 Official Guide Book (Turn 25)
Add an image to this gallery

Retrieved from "https://codegeass.fandom.com/wiki/Collection_of_official_statements?oldid=74297"
Community content is available under CC-BY-SA unless otherwise noted.