Code Geass: Oz the Reflection (コードギアス 双貌のオズ Kōdo Giasu: Sōbō no Ozu) is a spinoff published in Hobby Japan magazine and Kadokawa Shoten's Newtype Ace magazine. It tells a story from the viewpoints of two different protagonists, written by Shigeru Morita (Code Geass: Akito the Exiled, A Dark Rabbit Has Seven Lives) of Studio Nue. Bandai's Collectors division will turn the KMFs in Oz the Reflection into Robot Tamashii (Side KMF) figures, and Bandai's Hobby division will also release a 1/35-scale plastic model kit of the KMF Alexander from the Code Geass: Akito the Exiled anime project. An Oz the Reflection Picture Drama was released on January 10th 2013 attached to that month's issue of Newtype Ace.

The spinoff takes place between the first and second seasons of the TV anime and is told from two perspectives. The photo story in Hobby Japan centers around Orpheus Zevon (Jivon), a young terrorist with the Knightmare Frame (KMF) Byakuen who is in pursuit of his lover's killer. The manga in Newtype Ace revolves around Oldrin Zevon, a girl in the Britannia Empire's anti-terrorist unit Glinda Knights who pilots the KMF Lancelot Grail. (The crest of the Glinda Knights indicates that the name is a reference to Glinda the Good Witch from the Oz novels and each character can be referenced to the same story.)

Oz the Reflection O2 takes place during the R2 arc in the anime. Oldrin, who disappeared a while before, now attends to a school called Pendleton School of Madrid. And Orpheus, now Lyre, is appointed as the Head Knight of the Glinda Knights.

2017 a.t.b. The large-scale revolt against Britannia caused by Zero, known as the "Black Rebellion", ends in failure. However, the influence of the Black Rebellion, as a sign of opposition against the increasingly powerful superpower, was strong. In addition to the major powers opposing Britannia like the Chinese Federation and E.U., acts of anti-Britannia terrorism began to occur with greater frequency in the countries under Britannia’s rule and a new period of resistance arose.

On the one hand, the Britannian homeland begins to nip the buds of resistance with its overwhelming military strength. Within that military strength, there is an anti-terrorist unit formed by Princess Marrybell mel Britannia, the "Glinda Knights". Deploying ace pilots and a great number of experimental Knightmare Frames on the Caerleon-class floating airship "Grandberry", the Glinda Knights are given the search-and-destroy mission of suppressing the terrorism that occurs in all parts of the world.

On the other hand, the terrorist-deployment organization “Peace Mark”, which possesses a worldwide network, is connected to terrorists in every country and terrorist-supporting organizations like Kyoto, inducing them to cause terrorism everywhere.

In the midst of such a chaotic situation, a boy and girl with the same face and the same name "Oz" encounter each other by chance in a small country in the Middle East...

Oldrin Zevon is a Britannian and the protagonist of the manga version of Oz the Reflection. Nickname "Oz". A girl who serves as the leader of the Knightmare Frame squad of the Britannian Military's anti-terrorism unit, the "Glinda Knights", which was formed in order to crush terrorism that began to frequently occur in Britannia's controlled regions after the "Black Rebellion". She fights under the belief of "protecting the smiling faces of the weak."

Marrybell mel Britannia is the 88th Princess of the Britannian Empire and the leader of the Glinda Knights.

Toto Thompson is a former maid of the Zevon family and the ship operator of the Glinda Knights' mothership, the Grandberry.

Leonhardt Steiner is a male knight and Knightmare pilot belonging to the Glinda Knights.

Sokkia Sherpa is a female knight and Knightmare pilot belonging to the Glinda Knights.

Tink Lockhart is a male knight and Knightmare pilot belonging to the Glinda Knights.

Orpheus Zevon is the protagonist of the photo story. Nickname "Oz". A boy who has travels throughout the world seeking revenge against the enemy that took his beloved person away. He receives and acts on requests from "Peace Mark," a terrorist organization that controls and dispatches terrorists. He has a lot of coarse behavior, but for some reason he sometimes displays the behavior of a noble.

Zi Dian is a terrorist and Knightmare pilot that works with Orpheus on requests from "Peace Mark".

Miss X is Orpheus' mysterious contact that gives him requests from "Peace Mark".

Ganabati is an engineer that helps Orpheus.

Wizard is a mysterious masked man who toys with the two "Oz"s. 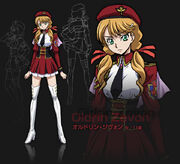 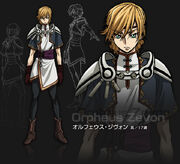 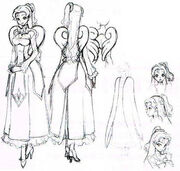 Cover for SIDE: Oldrin Vol.1

The Lancelot Grail is a prototype mass-production Knightmare Frame developed from the original Lancelot. It is assigned to the Glinda Knights and piloted by Oldrin Zevon. (The main Knightmare of the Oz manga.)

The Byakuen is a custom Knightmare Frame based on the Guren series. It is piloted by Peace Mark member, Orpheus Zevon. (The main Knightmare of the Oz photo story.)

The Agravain is a custom Knightmare Frame that appears to be based on the Gawain. It is piloted by the mysterious masked man, Wizard.

The Sutherland Glinda is a mass-production Knightmare Frame that is used exclusively by the Glinda Knights. There are three units, initially piloted by Leonhardt Steiner, Sokkia Sherpa and Tink Lockhart.

The Gloucester Glinda is a high-performance Knightmare Frame used used exclusively by the Glinda Knights. It is piloted in a simulation battle by Oldrin Zevon.

The Bradford is an experimental transformable Knightmare Frame that is the prototype for the Tristan. It is assigned to the Glinda Knights and later piloted by Leonhardt Steiner.

The Prytwen are civilian KMF made for sporting uses. They are actually refurbished and heavily modified surplus Glasgow that have their output power turned down by 40%.

The Glasgow Security Guard Type is a defensive Glasgow variant stationed in the Britannian homeland.

The Guren Mk-I is a prototype Knightmare Frame developed in the Militarized Zone of India. One unit is stolen by the Britannian Army and piloted by Dasko la Clermont.

The Glasgow Orpheus Custom is a customized Glasgow that is piloted by Orpheus after the Byakuen is severely damaged.

The Gekka Custom is a Gekka that was captured and remodeled by the Britannian Military after the Black Rebellion. It is piloted by Dasko la Clermont. 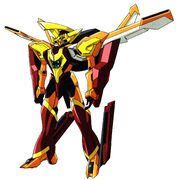 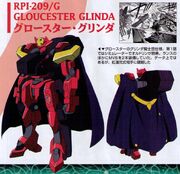 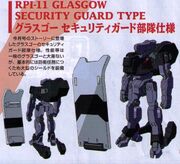 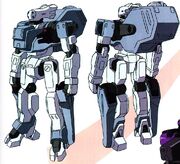 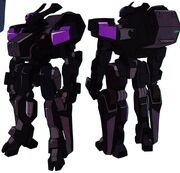