'Code Geass: Akito the Exiled' (コードギアス 亡国のアキト Kōdo Giasu Bōkoku no Akito) is a theatrical OVA. It was officially announced in the bonus materials of Code Geass: The Miraculous Birthday. The new theatrical OVA is directed by Kazuki Akane (of Vision of Escaflowne and Noein: Mou Hitori no Kimi e fame) and once again features original character designs by CLAMP. It is a side-story that occurs between seasons one and two of Code Geass.

The side story takes place in 2017 a.t.b., between the rise of the “Black Knights” organization and the return of the supposedly "dead" Zero. The setting is in Europe, where the Europia United (E.U.) allied nations are being invaded by the overwhelming forces of the Holy Britannian Empire. On the verge of defeat, the E.U. army forms a special unit known as “W-0″, of which a young pilot named Akito Hyuga is a member. Leila Malcal, a former Britannian Aristocrat comes to the Europia United for aid, commanding the Wyvern Knightmare corps comprised of Japanese teenagers. They recklessly plunge into a battlefield, where the survival rate is extremely low, at about 5% only. They fight for their freedom and for a home to which they can return.

Akito Hyuuga has short dark blue hair except for a longer area of hair tied in a thin braid down his back. He has dark blue eyes, and is shown in promotional art wielding a Wakizashi with a white hilt and square guard. The other known main character thus far is a girl named Leila Malcal, who has very long, ivory colored hair and light blue eyes.

The New Extraction Of Akito The Exiled.

Another screenshot of Leila Malcal

Another Character design of Gene Smilas

Poster for the 2nd Episode 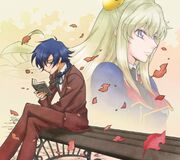 Art cover for the "Sound Episode 1" 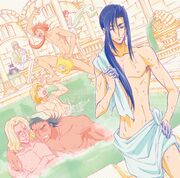 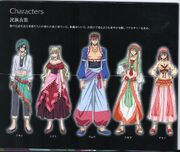 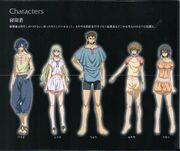 Below are other characters that are believed to be part of the main cast.

Main article: Ryo Sayama Ryo Sayama is the leader of a terrorist group that opposes the Mafia.

Main article: Shin Hyuga Shaing Shin Hyūga Shaing is a Euro knight that works for the Britannian Military. He is also revealed to be Akito's biological older brother.

The Alexander, a new Knightmare Frame, has the concept art of an unusual-looking Knightmare Frame, whose appearance suggests Sixth-Generation or later. The Knightmare Frame is piloted by Akito Hyuga and is a special operation unit that was originally developed in the E.U. by Anna. Akira Yasuda has returned to design the mechanical Knightmare units.

Below are other Knightmare Frames that are confirmed to make an appearance in the OVA.

The Alexander Type-02, a variation of the Alexander, is a mass-produced Knightmare Frame used in the Special Forces Unit "W-0."

The Sutherland is a fifth generation Knightmare Frame, like the one from the original series, that was developed from the Glasgow with improved mobility.

The Glasgow is a combat type fourth generation Knightmare Frame, just like the Glasgow from the original series.

The Gloucester is a fifth-generation Knightmare Frame that was developed from the Sutherland.

The Panzer-Hummel is a mass-produced Knightmare Frame used by the Europia United military.

The Gardmare is a Knightmare Frame produced by the Europia United.

The Vercingetorixis a Knightmare Frame used by the Knights of St. Michael.

The Gracchus is a Knightmare Frame used by the Knights of St. Michael.

According to composer Ichiko Hashimoto, the theatrical screening events were going to take place every three months beginning Summer 2012 and preceding each BD/DVD release. The format consists of four OVA chapters with a running time of about 50 minutes per episode.[1][2] Hashimoto had also originally estimated that the official soundtrack would be released in Fall 2012.[3] However, these dates were postponed a few times due to production delays.

The Blu-ray and DVD for the first OVA episode were released on January 29, 2013, coming in both standard and limited editions; the latter contains an additional 24-page booklet, a special slip cover featuring Akito and Leila back to back, as well as 15 postcards featuring images of various characters taken from the ending sequence of the OVA.

For the second OVA episode, the Blu-ray and DVD will be released on 25 December and the PSN said that the RAW version were released on 19 October.

The Akito the Exiled Official website announced the third and fourth episode would be released in 2 May and 4 July 2015. The title for both episode is Kagayaku Mono Ten Yori Otsu (The Brightness Falls) and Nikushimi no Kioku Kara (From the Memories of Hatred). The first screening of the 3rd episode will be on May 2 of 2015.

The Akito The Exiled Official Website announced the Fifth Episode would be released in this Autumn 2015.

However, the release date of this episode has been pushed back to 6 February 2016.

Blu-ray DVD for the fifth, the final episode of Akito The Exiled OVA episode, released on 22 April 2016.

BIGLOBE's Anime One portal site began streaming a 53-second promotional video for the Code Geass: Akito the Exiled anime project on Monday. The website is also streaming the project's previous promotional video that debuted in January. The spinoff anime's first installment will open in theaters in Japan on August 4.[13] 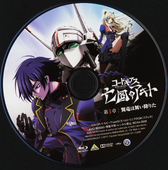 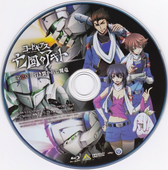 DVD Version of chapter 3. Notice the Knight of Honor's shield

The Knightmare Frame, Alexander, as it appeared in the preview.

Alexander in a battle.

Some other Knightmare Frames that have made an appearance in the preview.