The Cockpit Ejection System (コックピットの排出システム, Kokkupitto no Haishutsu Shisutemu) is a system that disengages the cockpit from the Knightmare Frame using rocket boosters. Typically, they have an IFF Transponder installed. The system can be manually activated, or, if the Knightmare's sensors deem that the pilot's life is in danger, it will automatically eject. When the cockpit is disengaged, the head of the unit that is mounted on the cockpit will detach.

The Cockpit Ejection Systems are installed to allow the pilot(s) to escape life-threatening situations that occur during battle, such as their Knightmare being severely damaged to the point that it is likely to explode. However, it should be noted that the likelihood of proper ejection is significantly lowered if the essential components of the cockpit are damaged or destroyed during battle, such as when a Frame is damaged by the Guren's Radiant Wave Surger. After the rocket boosters finish firing, the cockpit can deploy a set of parachutes. However, it is also possible to disengage the Cockpit Ejection System as shown in the situation with Urabe and his Gekka, where he sacrificed himself to damage the Vincent.

All production-model and most prototype Knightmare Frames are equipped with this system. The only Knightmare confirmed to lack an ejection system is the Z-01 Lancelot, due to Lloyd and Cecile neglecting to install it. This flaw is later addressed in the Lancelot Frontier, which except for its color, is otherwise identical to the Lancelot, but slightly weaker. It is implied that Suzaku's final machine, the Lancelot Albion, had an ejection system, considering how Suzaku faked his death at the end of the series, but it was never confirmed.

Inside a Black Knight's cockpit 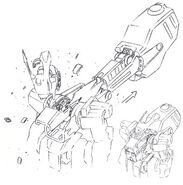