Clovis la Britannia (クロヴィス ラ ブリタニア, Kurovuisu ra Buritania), 24 years old, is a character introduced in the first season. He is voiced by Nobuo Tobita and in English by Sam Riegel.

Based on what his family mentioned of him and how he acted throughout his life, Clovis was somewhat of a snob to anyone outside the Imperial Family, whom he loved. During his role as the governor of Area 11, he commissioned many extravagant complexes for both Eleven and Britannian use. This was a front as he, like many Britannians, actually cared nothing for them, at one point ordering the execution of thousands to preserve his position.

He is a ladies man, designing many revealing or provocative swim suits and dresses (as implied by Euphemia li Britannia during a trip to the beach with Cornelia in the manga).

Clovis la Britannia is the Third Prince of the Britannian Imperial Family and the former Viceroy of Area 11 and son of Gabrielle la Britannia. He's also Lelouch vi Britannia's older half-brother. Before Lelouch and Nunnally were exiled to Japan, Clovis had a relatively good relationship with Lelouch's family and always took the time to visit Lelouch and play chess with him. Although he lost time after time, Clovis was not discouraged and viewed Lelouch as a rival in chess. Clovis enjoys art and his sister, Euphemia, notes that he is a talented painter.

Clovis eventually went to Area 11 to become its viceroy being told that Lelouch and Nunnally had died there, unaware of his lost siblings position as political hostages and remained alive but in hiding. He is timid by nature, but he has narcissistic attitude and disdain of the Elevens (displayed by his not hesitating in ordering the complete eradication of the Shinjuku Ghetto, despite the presence of hundreds of civilians inside) gives Lelouch an opportunity to start throwing the Britannian Imperial Family, as well as the Empire of Britannia itself, into turmoil.

Before his death, it appeared that he was involved with the project known as Code R, which amongst other things conducted experiments performed on C.C. and becomes very nervous when C.C. is stolen in a capsule by Kallen and an associate from her resistance group named Nagato. Clovis becomes fearful of the incident becoming public, saying that he will be disinherited if that is leaked outside. It is unknown to what extent Clovis was involved or interested in such experiments, though in episode 19, Schneizel finds a strange cave with some relation to Geass and remarks that Clovis would have been more suited for the job of investigating it.

Lelouch, after using his Geass on Clovis, learns that Clovis knows nothing concerning the death of Lelouch's mother, Marianne, though Clovis suggests that Cornelia li Britannia and Schneizel el Britannia are more likely to know who killed Marianne. After obtaining the information, Lelouch pulls the trigger on his brother and Clovis becomes the first casualty of Lelouch's revenge against the Holy Britannian Empire.

When the death of Prince Clovis is announced in the media, it is Suzaku who is accused of the murder. 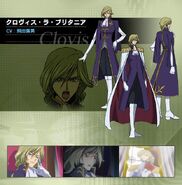 Add an image to this gallery
Retrieved from "https://codegeass.fandom.com/wiki/Clovis_la_Britannia?oldid=37871"
Community content is available under CC-BY-SA unless otherwise noted.