Charles zi Britannia (シャルル・ジ・ブリタニア, Sharuru ji Buritania), known as Charles di Britannia in the English subbed), born on August 4th 1955 a.t.b. (63 years old) was the 98th emperor of the Holy Britannian Empire, the father of Lelouch vi Britannia (and many others) and V.V.'s twin brother. He had a Geass power that allowed him to suppress and alter the memories of those he achieved eye contact with, but lost this power in exchange for V.V.'s code which granted him immortality. He served as the main antagonist in both of the series. He was voiced by Norio Wakamoto (Japanese), and by Michael McConnohie (English).

Charles was a very large man, towering over nearly all other characters in the series, and appears to be muscular and well-built. He had long white hair (though it was originally a light brown) styled into Renaissance-style curls. He had violet eyes and angular features.

Charles was a cold and intelligent man who believed strongly in concepts such as social Darwinism, believing that only the strongest are worthy of rising in society. His philosophy was not reserved solely for his adversaries, however, as he treated Lelouch harshly after the death of Marianne, offering no sympathy to his then-adolescent son.

He had no moral compunctions in how he dealt with his enemies. His rise to power saw numerous political rivals and their allies killed, and even as Emperor, Britannia continued to engage in global conflict with its adversaries. Ultimately, he cared little for the casualties of Britannian military conflicts, be they enemy combatants, innocent civilians, or even Britannian soldiers.

However, his views and ideology seems to have stemmed from his traumatic upbringing. As a child, he often witnessed his family kill each other in pursuit of the throne, thus he naturally came to understand that without power, one cannot survive.

Charles had at least 108 consorts. He installed most or all of his children into important positions throughout the empire to see what their true abilities were. Charles saw his children as extensions of the collective consciousness rather than human beings, and showed little concern for their well-being. He plotted to destroy the collective conscious, thus uniting humanity as a single mind.

He publicly supported inequality as well as invited and called for competition to promote progress. Ironically, Charles actually planned to make all of mankind equal and truthful by destroying "God," the collective consciousness of humanity, and thus uniting every living being as one mind that was incapable of deceit. In the seventh episode of Code Geass R2, he reiterated that traditional morals of not murdering, deceiving, stealing, and remaining faithful to one's spouse are counter-progressive lies made by the weak to defend themselves, and that this is Britannia's duty to show the world. Above all else, he hated deceit, seeing it as the root of all evil, which was apparently brought about by trauma during his childhood wherein members of the imperial family lied and murdered for the right to succeed the throne.

Charles appeared only occasionally in the first season. In a flashback, a ten-year-old Lelouch questioned why he did not try to protect Marianne. Appearing irritated by this, Charles disowned Lelouch there and then, sending Lelouch and Nunnally to Japan as political hostages. Most of his appearances in the first series were brief, though show that he apparently knew of Lelouch's actions, particularly his use of Geass. In The Stolen Mask, he claimed to be speaking with Clovis even after his death at the Sword of Akasha. He was last shown during the Special Administrative Zone Massacre. Charles was shown to be overjoyed that Lelouch had (although unintentionally), manipulated his own half-sister Euphemia into causing such chaos and bloodshed, saying that Lelouch was now worthy of being called his son.

Charles trusted Suzaku enough to lead him to the Sword of Akasha, which hardly anyone else had ever seen. C.C. suggested that V.V. was the one who gave Charles his Geass, though the specific nature of their Code was to destroy the gods. In actuality, Charles is V.V.'s twin brother, whose process of ageing was halted at an early age because he became immortal. At the sword of Akasha, V.V. asks Charles why he did not tell Nunnally about Zero's identity and his geass and Charles replies that it there is no point and is unnecessary.

Charles initially possessed a Geass power, but gave it up in exchange for immortality when Lelouch and the Black Knights attacked the Geass Directorate. Lelouch trapped the Emperor inside the Sword of Akasha, or so he thought, until Charles announced to the world that he was still alive during the formation ceremony of the UFN and declaring that all Zero had done was made it so that whoever won the ensuing war would control the entire world; at that time, the world was literally divided between Britannia and the UFN. During the Second Battle of Tokyo, Charles arrived in Area 11 himself, much to the shock of Lelouch, and entered the Sword of Akasha through the Thought Elevator at Kamine Island. Once inside, Charles was confronted by Lelouch once again and soon after, Marianne, C.C. and Suzaku all arrived. During the time, Charles finally told Lelouch the truth of the events regarding his mother's death and all that had occurred, including his real reason for sending him and Nunnally to Japan as hostages. He and Marianne then explained their one true goal and began to initiate the Ragnarök Connection.

Charles announces the declaration of the new nation called Holy Nation of Eden Vital and orders Rolo, the Cardinal of the Order and the rest of Britannia to arrest the Viceroys throughout the Areas. He begins the initiation of the Sword of Akasha at Eden Vital and Nunnally appears before him. He, Marianne, C.C., and Nemo disappears along with Eden Vital when Nunnally rejected the world that they have built.

Charles had gained an immortal code to resurrect himself after killing his brother V.V. After attaining immortality, his Code mark was placed on his right hand. Like C.C., Charles is absolutely immortal, unable to die, age, get sick, or be permanently wounded, is absolutely self-sustained, and his mind and soul were as immortal as his biological body.Any injuries he suffers immediately heal, even if he is incinerated, blown up, decapitated, completely deleted, or even if he is completely destroyed to the sub-atomic level, he will still return to life. Absolutely immune to all harm, nor can he die of any natural causes.

His existence and soul were completely independent of even the concept of reality, making him not bound to the subjects of life, death and manipulations. As shown with his immunity to Geass.

Charles' Geass in the anime allowed him to freely alter an individual's memories at will, and also seal the Geass of others, as well as physical senses such as sight, though there are ways to break or weaken these seals, such as contact with an Immortal or sheer willpower, though the latter may have only been possible thanks to his death. He can use his power more than once on a person. Interestingly, Charles' Geass Sigils appear in both eyes, a display of his experience with Geass. As shown in Akito the exiled, one can fight the geass if reminded of something that was sealed away by the geass, for Lelouch it was his desire to protect Nunnally. Another reason that Lelouch was able to fight the geass may have been because an alternate personality was implanted into him by Charles in Akito the exiled, unlike R2 where Charles simply altered Lelouch's memories instead of completely changing them. 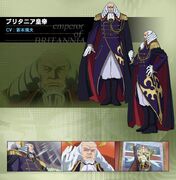 Retrieved from "https://codegeass.fandom.com/wiki/Charles_zi_Britannia?oldid=63450"
Community content is available under CC-BY-SA unless otherwise noted.