Athough Carine is around the same age as her half-sister, Nunnally, her personality is the exact opposite. Unlike Nunnally, she derives pleasure from war and violence. While Nunnally lived in Pendragon, Carine disliked her pacifist stance. Carine's faults were arguably indispensable to surviving in the Royal Court as a princess of Britannia.

Carine's first appearance in the series occurs after the failed attempt to form an alliance with the Chinese Federation through a marriage between First Prince Odysseus and the young Empress Tianzi. When her half-sister Guinevere demands retaliation for the perceived insult towards Odysseus in regards to the failed marriage, Carine expresses delight at the thought of battles and violence that would result and how it would upset her half-sister Nunnally. However, Odysseus admonishes Carine's inclination for violence and tells her to be nicer to Nunnally.

One month after the Emperor's disappearance following the Second Battle of Tokyo, Carine appears in the Imperial Court where Lelouch compels her and the rest of the court with his Geass to accept him as 99th Emperor of Britannia. She is then employed as a maid, along with Guinevere.

In 2017, she served as the commander of the Far East Exchange Center in Hong Kong, which is openly known to be a Britannian military base with the cover of being a private economic organization branch office. When a Guren Mk-I was captured from Chinese terrorists by the Britannian army, Carine made her knight Dasko la Clermont pilot the Knightmare in order to get as much operational data from it before having to hand it over to Camelot, for the sake of improving her standing in the competition for the Britannian throne. However, Orpheus Zevon's Byakuen crashes into the base during the testing and battles with Dasko in the Guren. In the end, Orpheus corners the Guren and forces it to self-destruct, though Carine and Dasko manage to escape and survive.

She is revealed to have survived Schneizel's bombing of Pendragon having been saved by Dasko, though she appears to have suffered amnesia. 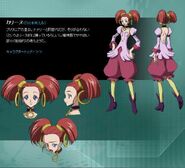 Karine's last appearance in the series 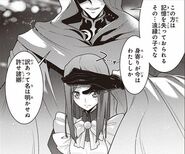 Carine and Dasko
Community content is available under CC-BY-SA unless otherwise noted.
Advertisement